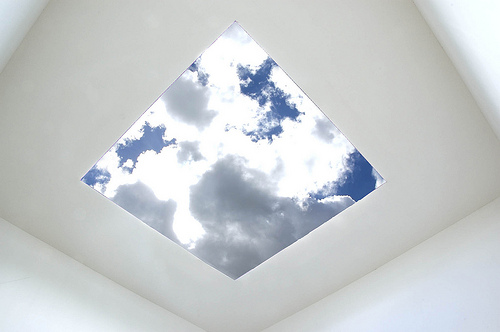 James Turrell is a light artist and an architect. He is also a Quaker, and created one of his skyspace installations for Live Oak Friends Meeting in Houston, Texas.

His installations are site specific, and often change with the time of day. People often say that they are hard to describe, and that the experience of interacting with them has a more powerful effect than they expected. I have seen very little of James Turrell’s work in person, so I’m relying on other people’s videos, posted on the internet. These videos vary in professionalism; some are from television features of Turrell’s work, while others are films that people have taken on their cameras or phones, while walking around an installation. Turrell’s art is about how light transforms spaces, and I think it is easier to grasp a sense of space, and understand how the light changes throughout the day if you can see glimpses of it in motion.

Thinking about James Turrell’s work, I tried to compare it to something I had experienced, and came up with ‘The Weather Project’ by Olafur Eliasson, shown in Tate Modern’s turbine hall in 2004. For this artwork they had mirrored the ceiling, making the already vast industrial hall seem unworldly large. At the far end of the hall, a semi-circle of bright lamps fixed to the wall were reflected in the mirror to become a whole circle. The effect was of a sun, that filled the turbine hall with hazy yellow light. People lay down in front of it on the industrial concrete floor and basked in the light, and the mist created by the humidifiers. The floor was hard, the light was yellow and looking up, you could see your own reflection on the ceiling, small and black like an ant. It was like lying down on the pavement, on the hottest summer day in a city and watching the heat make the buildings waver. You could almost feel the heat.

Visiting The Weather Project feels like the closest experience I’ve had to how people describe James Turrell’s installations. The way the light filled the space made me feel like I was somewhere else; it made me slow down, and react differently to the space than I usually would. I think that the idea of light that gives you a new awareness of space is close to what James Turrell achieves in his installations.

One type of installation that Turrell has created numerous variations of is the skyspace. Skyspaces are rooms with apertures overhead through which you can see the sky. The  holes are oblong or circular, and often take up much of the ceiling; the rooms are usually small and plain, with benches along each wall. Some have LED lights that cast washes of colour across the room and many of them are designed to be seen at sunset and sunrise, so that you can look through at the changing sky. Describing one installation, Turrell says that the skyspace brings ‘the sky down closer to you, so it seems almost as if it is like a piece of glass over the top. It’s no longer a sky that’s over there, away from you, but one that has close contact to the space you’re in’. My own experience of a skyspace was at the Yorkshire Sculpture Park, where Turrell converted an eighteenth century deer shelter into an installation. I remember the concrete benches, and sloping walls that drew my attention up to the light. I remember it feeling very still, as if everything around had stopped and the sky was the only thing to pay attention to. It felt a little like sitting at the bottom of an dry well, and looking up.

Another skyspace is at Pomona College, California. Here, there are special lighting displays at sunset and sunrise and a three minute ‘chime of light’ washes across the ceiling on the hour every hour. The video of this skyspace was filmed at night, and the view through the space in the ceiling is only of blackness. When the chime of light starts, colours fade in and out around the space, turning the ceiling pink, blue and mottled grey and seeming to have depths and gradations, while the sky itself remains a void. The oblong of blackness in the middle of the space draws you in, looking more like a solid pane than a hole. Watching the video, you can hear the sound of water from the fountain below. Sometimes the ceiling goes dark, and then lights up again in pale washes of colour. It feels timeless and you could almost believe that it was a time-lapse film of a whole night’s worth of changes in the sky.

These videos, ten minutes long at the most, can only show moments of the long span of some of the installations. The light often changes slowly, and patterns emerge over time.  Speaking about the passage of light through one of his skyspaces, Turrell says that ‘often things that are close to the sublime have a different time scale, and a different unfolding’. He is talking about the light itself, as a material that has its own form and sense of time.

When another person talks about the ‘presence of the light’, suggesting that it has form and substance of its own, the phrase seems very close to Quaker spiritual language. It reminds me of how people describe what they seek and experience in meeting for worship and one skyspace installation, in which orange light surrounds a large, oblong aperture is actually called ‘Meeting’. The language of spirituality often comes up when people talk about Turrell’s work. Some skyspaces see people frequently come to meditate, and in the below video we can see a group chanting the Hindu Maha Mrityunjaya Mantra at the skyspace in San Francisco.

The films come back often to the idea of the light’s form. In a video taken in a German museum in which Turrell had a many-roomed installation, we see what appears to be a large, softly-painted purple canvas on a wall. The narrator appears through it, and it’s revealed to be a broad doorway, illuminated from within. At the James Turrell museum in Bodega Colomé, the camera looks through a sequence of adjoined rooms, each illuminated with a different colour. Their doorways are aligned, so looking down the corridor you see doorways within doorways and the effect is like looking through a kaleidoscope. Although there are aspects of illusion to Turrell’s work (he compares one of his installations to a camera obscura), in interview he frequently talks about light as a material; it’s not just smoke and mirrors, but something that can be shaped and moulded.

Turrell’s life project is the Roden crater in the desert in Arizona, a crater that he scouted himself by flying his own plane across the state. He’s built on it, and had it excavated to provide the best view of the sky. In another video, Turrell encourages a reporter to come and lie down and look at the horizon. He does, and lying on his back in the centre of the crater, says: ‘you see the sky as a huge blue dome, all embracing, transparent, but somehow solid. An eyeball.’

I find the description of the sky as an eyeball appealing; suggesting that something you thought was a void can flip in your perception to become a thing that is looking back down at you. The reporter’s words seem to evoke the spirit of James Turrell’s light installations. The transient movement of the light is caught in the solid forms of the structures, and he creates something that is neither one nor the other, but both solid and transparent.