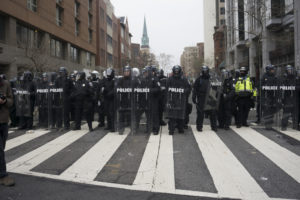 “He is a Quaker, and he acted like one throughout. He was completely nonviolent and always acted that way and spoke that way.” This is what lawyer April Downs told the Huffington Post after her client Casey Webber was found not guilty of charges that could have led to a sentence of up to 80 years imprisonment for his involvement in a protest against Donald Trump.

The charges had been brought against Casey and over 200 others after protestors smashed windows in Washington DC on the day of Donald Trump’s inauguration in 2017. After a series of acquittals and dropped charges, prosecutors continued with cases against just under 60 defendants. So far one has pled guilty, ten have had charges dropped and 47 more are still facing prosecution or are mid-trial.

Casey is a baker who was reported in the Washington Post in 2017 as saying that his role in the protest was as a medic, helping others, when he was arrested.

Last year, Casey gave a talk to Chapel Hill Quaker Meeting in the US about “Quakerism, Anarchism and Pacificism”. Casey was brought up as a part of the Chapel Hill Quaker Meeting and he attended youth events there and Southern Appalachian Young Friends retreats during his high school years. He drew on similarities between Quakers and Anarchists, such as the large amount of time spent in meetings. He told the Quakers that many anarchists in Washington DC fund themselves with working class jobs and spend a lot of time in direct action to help the disadvantaged. Casey estimated that he spends around 30 hours per week in such activities, including organising a free school for people who cannot afford a traditional education, on top of his full-time job.

“Basically all I know that the anarchists do is they read books, they make phone calls, they hand out food to the homeless,” explained Casey. But it is not an easy path to take: “Doing good works is not supposed to be easy. It’s exhausting, it’s tiring.”

In February 2017 Chapel Hill Quaker Meeting had agreed in a business meeting minute to send a letter to the United States Attorney’s Office, challenging the legality of the arrest and asking for all charges to be dropped. They explained that they teach values in their Quaker meeting of simplicity, peace, integrity, community and equality and that they are “proud of the way that Casey exemplifies these values”.

The meeting’s letter concluded: “Casey is a model to us in the way that his sense of community so clearly encompasses the most oppressed in our society. This is a goal toward which we Quakers strive, though we often fall short.”