A group of Quakers held a meeting for worship in the atrium of the British Museum today as part of a protest against the museum’s connections with multinational oil company BP and to highlight concerns about climate change. 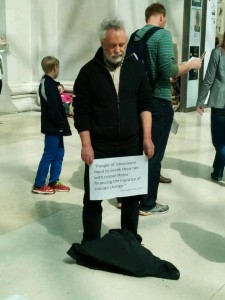 A Quaker stands in silence at the British Museum.

As well as bearing placards calling on the museum to end its relationship with BP, some of the protestors also held signs with a quote from Desmond Tutu: “People of conscience need to break their ties with corporations financing the injustice of climate change.” 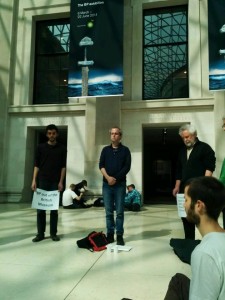 Participants reported that security staff at the museum observed the meeting for worship but did not interrupt it.
The protest comes after Quakers in Britain as a corporate entity ended their investment in oil companies in 2013. The fossil fuels divestment campaign was recently described by former UN Human Rights Commissioner Mary Robinson as a “shining example of what is needed to curb greenhouse gas emissions”. 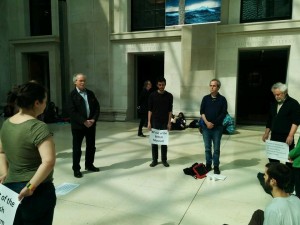 Quakers worshipping at the British Museum while holding placards.

BP is the British Museum’s longest standing partner and is the sponsor of the current Vikings: life and legend exhibition. As well as the British Museum, BP also has sponsorship deals with the National Portrait Gallery, the Royal Opera House and Tate Britain and spends millions of pounds to maintain those arrangements. After the announcement of a funding deal in 2011, Neil MacGregor, director of the British Museum said: “Thanks to BP’s longstanding support well over one million visitors to the British Museum have been able to get close to Michelangelo, discover the ancient Egyptian Book of the Dead, experience Chinese New Year and understand Ancient Persia. BP’s renewed commitment to the Museum allows us to ensure that our six million visitors a year will continue to have the opportunity to experience important loan exhibitions for the next five years. We are hugely grateful to BP for their ongoing support.”

Photos from the meeting for worship have been shared at https://www.facebook.com/SustainableQuakers.

One thought on “Quakers protest at BP and British Museum relations”