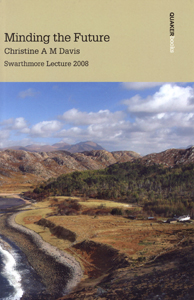 The 2008 Swarthmore Lecture by Christine A M Davis. Reviewed by Jez Smith.

The latest in a long line of a standing fixture in the British Quaker tradition, Minding the Future, the 2008 Swarthmore Lecture, by Christine A M Davis, is about how we manage our resources, or, stewardship.

Minding the Future is an opportunity for Friends to review individually and collectively their history, tradition and spiritual inheritance. It is also an opportunity and a spur for us to continue our work, renew our faith and share our spiritual gifts.

Christine A M Davis is a Scottish Quaker, based in Dunblane and by all accounts she is a career committee member. This is not a caricature, for she freely admits that her dedication to committees has meant that she has not had the experiences that you come across in adventure books. But her life-long work in committees is not as a jobsworth and a bureaucrat, but someone who sees value in joining together with small groups of people to get things done and create worth from our resources.

With this in mind and some sharing of her background through her formative years and early Quaker life (she became a member of the Quakers aged 20, some forty or so years ago) she gets to her task.

One of the beautiful elements of Christine’s book is her interspersing of Scottish poetry at useful points in the book. In the lecture they were read by another person, with one Friend telling me that this method of delivery broke up the lecture and helped her to concentrate. (Incidentally two young Friends told me that they fell asleep during the lecture, while an older Friend told me that this was the first lecture in ten years that she hadn’t fallen asleep in. All three found great value in the lecture.)

The first poem, Direadh, by Hugh MacDiarmid, lists the names of many wildflowers/heathers. One Friend told me that with his knowledge of plant life the reading of these names immediately had him hooked on the lecture.

Christine uses six excerpts from work by William Soutar, beginning in her introduction with Aince upon a day:

Aince upon a day my mither said to me:

And dinna tell a lee.

Christine shares with us many reflections from her committee work. Most notably is her ecumenical work in Dunblane, particularly in the immediate aftermath and longer-term after the Dunblane massacre when youth worker Thomas Hamilton killed 16 school children and a teacher in a school in the town in 1996 (Thomas then committed suicide). Christine relates that she realised the import of the event to the outside world when Kate Adie of the BBC turned up. Christine associated Kate with reporting from world crises, now she realised how people from outside this town of 8,000 people were viewing them.

Christine had worked with Thomas and was part of a group that at the time were working to have further checks made about him. She shares that she found it hard to reconcile the fact that they had not prevented the massacre, tempered with realising that they could not have known or predicted what he would do. The questions have clearly lingered with Christine and informed her thinking.

Incidentally, as I write about Christine it is easy for me to use her first name. With the murderer, Thomas, it seems strange using his first name and not just his last name, Hamilton. Does that humanise him rightly or wrongly? I don’t know, it just feels odd.

A few Friends have told me that they had fully expected this lecture to be at least in part about buildings. They had presumed that Christine would encourage us to look after our Meeting houses. She didn’t and those Friends said that they were relieved.

Instead, Christine concentrates very much on the spiritual and religious elements of our heritage. For example, she draws our attention to the testimonies of peace, simplicity and equality. She relates examples of people working in isolation for one, then suggests that as we pursue human justice we must surely be working with others. Peace is one testimony that Quakers are famous for working on and with, she cautions Friends in favour of an integrated approach.

More so, however, she encourages us to approach our work and challenges with tenderness. She draws parallels with John Woolman in this example and others.

At the same time as encouraging us to be like Woolman, she counsels against us resting on our laurels. As she researched, prepared and wrote this lecture Christine must have been influenced by the 200th anniversary celebrations of Britain abolishing its slave trade. During 2007 Quakers were able to gain a reasonable amount of publicity for themselves and their work on the back of this celebration and Christine is urging us to go beyond this. Now, she says, we must ask ourselves what we will be remembered for in the future.

As an aside, it is worth noting that Quakers continue to be at the forefront of the fight against slavery in Britain. Two Quakers are senior in Anti-Slavery International and the Gangmasters Licensing Authority in our country, two organisations working in different ways to combat slavery and labour issues.

I think that Quakers are doing much now that they might be remembered for in the future, so there should not be too much cause for concern. Of course, the call to each individual to think about their own lives is important, but we should not use this as an occasion to forget some great work.

Circles UK has just been launched as an independent charity after several years hard work by Quakers. As they state on their homepage, Circles UK is an ‘innovative and successful community response to reducing sex offending, working in close partnership with criminal justice agencies’.

I have previously worked at the Quakers United Nations Office in Geneva and have witnessed firsthand some intricate and effective high-level work on human rights and refugee issues.

Elsewhere, Living Witness is working with individuals and local groups to develop new ways of living in response to climate change concerns.

These are just three examples of Quakers in action today. Perhaps you will have your own examples of Light shining brightly.

During her lecture, Christine urges us not to get bogged down in tussles over words. She raises the concern that some Friends are so worried about offending people that they end up not communicating well at all. She hopes that we can get beyond this situation and listen to each other with open hearts and open minds.

There is a whole chapter in the book on money and wealth and how we deal with it. Christine urges Meetings (and by Meetings, she means the individuals in the Meeting) to think carefully about this resource, how they use it within the Meeting and how they are open to help each other when personal problems arise.

Related to wealth in a way, but not directly concerned, Christine points out that there are many more one Quaker in the family situations today than there were in previous centuries. The explicit implication is that those of us who are in this situation can give less time to the Quaker Meeting and have other concerns and major interests to balance. For example, my partner is not Quaker, so, if there is a choice between a Quaker activity and a non-Quaker activity I may well choose the latter because I might otherwise be excluding my partner and the time we get to spend together is limited.

My partner, too, is a steward of limited resources. As I write L is away at a Woodcraft Folk camp. She is co-leader of a local group, providing activities and opportunities for learning and development for local kids. Her camp is an opportunity for city kids to get out into the countryside for an action-packed weekend where they can develop their own small communities. This is a choice that L has made, to put some of her time, energy and effort into this organisation.

So with me in the Quakers and her in the Woodies, these are some of the life choices that we make together as a couple. Our own little community of two, but also we are parts of other communities and together we weave together the rich threads of our lives.

At the end of her lecture Christine draws on a basic psychotherapy exercise, asking Friends:

‘What is the little thing that you can do?

Are you doing it?

Is your stewardship faithful?

Are you living adventurously?

Are you minding the future?’

She signs off with Benediction by William Soutar, which begins:

When words are done we speak with silences.

And in the final verse finishes:

Nothing is ours; Yet silences begin to open doors by which life enters in.

This review was first published on http://quakerstreet.blogspot.com.

Minding the Future is available, from the Quaker Centre Bookshop, priced Â£6.