â€œFor many years I have thought of working overseas alongside the people of another country â€“ sharing their outlook, beliefs and difficulties and giving in return love and what little knowledge I possess. These thoughts and aspirations became sharper when I began to face the prospect of working as a doctor in the army. My conscience hovered on the prospect, I could not pull myself to such a task. It seemed as though something of God within me stopped short at that. And as I rested awhile on that difficulty it came clear to me that my service was not of that sort. The life of Jesus began to mean something practical for me as I read and re-read the Gospels with greater and more practical intensity. Now I could never follow that path that Jesus followed with guns, bayonets, bombs and destruction. Truly Jesus is the Christ. Truly Christâ€™s way must be the way for me, however much I falter and fail. Lord uphold me and draw me to thee. I am nothing without thee. In thee I must live and have my being.

My mind was now set. There could be no war for me and yet I was not oblivious to the suffering around me. I felt a share in the suffering created and began to pray that with Godâ€™s help I might do something practical to relieve it. I sought for channels through various missionary societies but I was no use to them. Finally I thought of my own beloved Society of Friends. For all of the people I longed to work with most, the Quakers stood supreme. I appreciated their work, the way they worked and their understanding of friendliness to people all over the world. I felt that working with Friends would be an enriching experience and a deepening of the religious life.â€

The text above is from the first entry in John Cornesâ€™ diaries of his and his wife Jean’sÂ work in Korea with the Friends Service Unit (FSU), dated 06/02/1954.

In 01/2013 John Cornes was posthumously awarded the South Korean Order of Diplomatic Service Merit â€œHuenginâ€ Medal. He and Jean served with the FSU in Korea at a hospital in Kunsan. Jean was awarded the medal in a ceremony at the Korean embassy last month. The citation for the award states that it is “in recognition of and in appreciation for his outstanding and meritorious service rendered to promoting friendly relations between the Republic of Korea and the United Kingdom of Great Britain and Northern Ireland.”

Serving with Friends in Korea was a life changing experience for him and all his life he made a point of welcoming those from other parts of the world when he came into contact with them at work, in Quaker settings and at other social occasions says Ruth. â€œWhen I was small we shared our home with a Korean family and later with a series of students, colleagues and others who needed a home in Bristol for a while. The neighbours thought we were odd. I recall meeting the father of a primary school friend a few years ago who said â€˜Oh, your family was the one with refugees in the atticâ€™ â€“ wrong on both counts, they werenâ€™t refugees and they didnâ€™t live in the attic â€“ but I had never thought of what he did as unusual and my love of travelling and meeting Quakers and others from different places and traditions owes a great deal to his attitude.â€

â€œI think what has struck a chord with a new generation of Koreans is the life he captured in the photos he took,â€ says Ruth. â€œHis pictures show a Korea that has disappeared, but they also show people getting on with normal life and enjoying themselves and they record the work of the FSU and the hospital in Kunsan.”

At the award ceremony journalists wanted to know about Jeanâ€™s special memories of Korea.Â â€œDespite having difficulty remembering specific events and dates,â€ says Ruth, â€œher overwhelming memories are of the love and support of her Korean colleagues, their resilience and their determination to build a better society.â€

John shared an account of the circumstances leading up to his Korean experience with Nayler in 2011. Read it here. 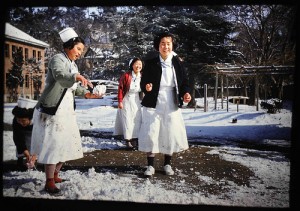 Korean nurses having fun in the snow. Photo: John Cornes.

One thought on ““A deepening of the religious life”: John and Jean Cornes’ Korean witness honoured”