Quakers in Britain have re-stated their opposition to nuclear weapons ahead of the publication of Trident Commission report that examined whether the UK should retain its nuclear deterrent.

The Trident Commission was set up by the British American Security Information Council (BASIC) and funders include the Joseph Rowntree Charitable Trust and the Ploughshares Fund. The commission is expected to find that the nuclear deterrent remains vital to prevent the UK suffering ‘nuclear blackmail’, according to a report in the Independent. The commission is also expected to state that the final decision on replacement of the UK’s nuclear weapons should be delayed for 2 years and that keeping nuclear weapons works as a contribution to NATO. The commission is headed by politicians Malcolm Rifkind, Menzies Campbell and Desmond Browne.

The Quaker-led Joseph Rowntree Charitable Trust traditionally backs organisations that are working for a nuclear weapons-free world so it may be seen as unusual that a JRCT-funded organisation has produced a report that gives the impression of supporting the possession of nuclear weapons. The traditional JRCT stance is reflected in recent grants of £50,000 to the International Campaign to Abolish Nuclear Weapons and £90,000 to the European Leadership Network for its ‘Top Level Group’ of UK parliamentarians for multilateral nuclear disarmament and non-proliferation. The trust also recently gave over £150,000 to the Nuclear Information Service, which ‘works to promote public awareness and foster debate on nuclear disarmament and related safety and environmental issues’. JRCT recently funded BASIC with £200,000. 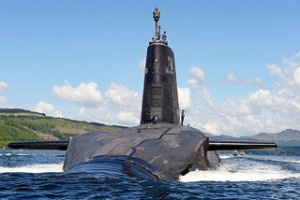 Quakers in Britain stated in a media release on 30/06/2014 that they “strongly disagree with the conclusion of a report published tomorrow that says the UK should retain its nuclear deterrent. Quakers say that Trident is a relic of the cold war and that the Trident Commission has failed to consider the legal obligations of the UK under the Nuclear Non-Proliferation Treaty to negotiate in good faith for the elimination of nuclear weapons.”

Helen Drewery, general secretary of Quaker Peace & Social Witness said: “The Trident Commission has failed to properly consider alternatives to Trident. These are weapons of mass destruction which can never be used and have proved to be a poor deterrent against acts of terror or against recent political events. Trident is a relic of the cold war.”

Quakers are disappointed that the report is not expected to address the legal and moral obligations of the UK under the Nuclear Non-Proliferation Treaty to negotiate in good faith for the elimination of nuclear weapons.

Helen Drewery added: “In 1955 Quakers said ‘To rely on the possession of nuclear weapons as a deterrent is faithless; to use them is a sin’. Quakers in Britain hold fast to that statement. We reject the notion that war is inevitable and advocate putting resources into nonviolent ways of solving conflict. Genuine security comes from the recognition of the inherent worth of every person in a society free from the threat of violence.”

Paul Ingram of BASIC explained that the report will be owned by the commissioners and does not necessarily reflect BASIC’s position. He also said that the report may contain surprises for those “who care to read it” once it is published.

“We stand resolutely by the publication of the Trident Commission’s final report as a valuable contribution to the debate in this country at this crucial moment in the renewal cycle,” explained Paul. “We expect it to stimulate a deeper level of discussion around the national security framework.”