Advices and Queries no.35 – Respect the laws of the state but let your first loyalty be to God’s purposes.

In the authorised version of Quaker history it is received wisdom that James Nayler, although a man of deep spirituality with a significant gift for preaching and writing, was an unstable and â€˜Ranterishâ€™ character who brought the Quaker community into disrepute. This perspective assumes that it was Naylerâ€™s conduct in Bristol in 1656 that forced the movement to exercise greater control over its more turbulent adherents by establishing a system of corporate structures and community discipline. I want to argue that modern Quakers should question this received wisdom by adopting a sceptical and critical approach to all narratives that seek to explain events in a way that blames the victims for the suffering and persecution they endure. I will try to do this with reference to the actions of Jesus in â€˜cleansing the Jewish Templeâ€™ and modern examples of civil disobedience.

On a rainy Friday afternoon on 24 October 1656 James Nayler entered the City of Bristol accompanied by a small group of bedraggled followers. They led him on a horse as they waded through the muddy streets singing â€˜Hosannaâ€™ and â€˜Holy, holy, holy, Lord God of Israelâ€™. This was clearly and intentionally a re-enactment of Jesusâ€™ entry into Jerusalem on â€˜Palm Sundayâ€™. However, like this biblical scene, Naylerâ€™s re-enactment did not bear the hallmarks of a â€˜triumphantâ€™ display of earthly power. Instead it seemed to represent an inversion of the worldâ€™s expectations. Nevertheless, the entire party was arrested and taken to jail. Those in power within the English Commonwealth, who had become increasingly alarmed by the rapid growth and subversive nature of the Quaker movement, saw this as a perfect opportunity to crack down on Friends by making an example of Nayler. He was taken to London to be tried by Parliament for blasphemy even though this assembly had no legal jurisdiction to do this. The charge of blasphemy rested on the accusation that Nayler was claiming to be Jesus Christ. However, as his testimony to Parliament makes clear the Bristol event was an outward sign dramatising the Quaker belief that Christ had returned in spirit and would dwell within all who accepted him. He said:

“I do abhor that any honours due God should be given to me as I am a creature, but it pleased the Lord to set me up as a sign of the coming of the righteous one. . . I was commanded by the power of the Lord to suffer it to be done to the outward man as a sign, but I abhor any honour as a creature.â€

Despite this unequivocal statement, the political objectives of Parliament far outweighed any consideration of justice and Nayler was convicted of â€˜horrid blasphemyâ€™. Only narrowly avoiding execution he was sentenced to a particularly brutal form of punishment. This included being pilloried and receiving 310 lashes through the streets of London which very nearly killed him. He was pilloried again and had his forehead branded with a letter B for blasphemer and his tongue bored through with a hot iron. Following a largely ritualistic flogging in Bristol, he was imprisoned for an indefinite period at Bridewell. After his sentencing Nayler responded:

â€œGod has given me a body; he shall, I hope, give me a spirit to endure it. The Lord lay not these things to your charge. pray heartily that he may not.â€ 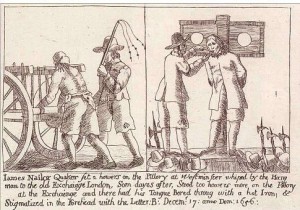 The case was used to maximum effect for propaganda purposes and in the aftermath Quakers suffered more intensive persecution at the hands of the authorities. Nayler was all but disowned by significant sections of the Quaker movement due to the alleged damage he had caused and for daring to challenge the leadership of George Fox (there had been significant conflict between the two men in the lead-up to the Bristol incident and Naylerâ€™s followers were instrumental in pressing his leadership claims). Although Nayler was later released from prison and reconciled with the wider Quaker movement, his health was broken and he died in October 1660 after being robbed while travelling home to Yorkshire to visit his family.

Jesusâ€™ â€˜triumphalâ€™ entry into Jerusalem represents the beginning of the end of his ministry. Shortly after this event, Jesus visited the Temple in Jerusalem which was the centre of Jewish worship and viewed figuratively as the â€˜footstoolâ€™ of Godâ€™s presence. It is difficult to over-estimate the religious and political significance of this sacred place. Having witnessed what was going on in the Temple during his first visit, Jesus returned the next day and drove the money changers and all those involved in buying and selling from of the Temple courtyard accusing them of turning it into â€œa den of robbersâ€. It would appear that this action sealed Jesusâ€™ fate. The Sadducees, who were part of the Jewish elite and collaborators with the Roman occupiers, decided that Jesus was a subversive and a threat to social order. In order to protect their power and privilege, he had to be neutralised. Not long after, Jesus was arrested by the Temple authorities who, in collusion with the Romans, had him executed by crucifixion. His followers scattered and the Jesus movement appeared to have been crushed. As we know however this was by no means the end of the story.

How do we respond to the actions of Jesus in the Temple courtyard? If we apply the approach traditionally used to interpret the â€˜Nayler incidentâ€™ we will have to conclude that Jesusâ€™ behaviour was irresponsible, blasphemous and downright provocative. It was bound to get him into trouble, endanger his followers and bring his movement into disrepute. He deliberately caused a disturbance within Judaismâ€™s most sacred place and threatened social order in the circumstances of Roman military occupation. Was this not madness? Did Jesus have a death-wish?

In the modern era we have seen many important examples of individuals and groups choosing to consciously break the law or contravene social conventions as a form of non-violent action.

The architect of modern non-violent resistance, Mohandas Gandhi, used a method of non-violent direct action he called Satyagraha in the struggle for Indian independence. In the Salt March of 1930 Gandhi organised a massive campaign of civil disobedience to protest about the British monopoly control of salt supplies. This involved a range of unlawful acts including tax resistance and led to beatings and imprisonments on a large scale.

In the US State of Alabama on 1 December 1955 a Black woman by the name of Rosa Parks refused a bus driverâ€™s order, based on State law and practice, to give up her seat for a white passenger. She was arrested and jailed. This act of disobedience prompted the Montgomery Bus Boycott and galvanised the modern American Civil Rights Movement. In this struggle for racial equality many activists were beaten, jailed and murdered by white racists.

In 1986 the Israeli technician Mordechai Vanunu, outraged by his governmentâ€™s covert development of nuclear weapons, passed information about this programme to the British press. He was then lured to Italy by a Mossad agent, where he was drugged, kidnapped and transported to Israel to be tried in secret for treason and espionage. Following his conviction he was imprisoned for 18 years. Much of this time was spent in solitary confinement. Since his release in 2004 he has suffered severe restrictions on his speech and movement.

How do we respond to the actions of these people? If we apply the approach traditionally used to interpret the â€˜Nayler incidentâ€™ we will have to conclude that their behaviours were criminal, seditious, treacherous and knowingly designed to undermine law and order and social well-being. What they did was bound to get them into trouble, endanger their communities and bring their beliefs into disrepute. They deliberately broke the law and provoked conflict in sensitive and difficult circumstances. Was this not madness? Did they all have a death-wish?

Of course, how we respond to these examples depends on where we stand on the issues concerned. Quakers and many other people would regard Jesus, Mohandas Gandhi, Rosa Parks and Mordechai Vanunu as heroes, liberators, justice-seekers and role-models but to those in power they were dangerous, they were the enemy. They threatened the very values, beliefs and practices that bind societies together and they undermined the security and well-being of Godâ€™s favoured nation or empire.

Throughout most of the 1650s the burgeoning Quaker movement waged a provocative but non-violent spiritual campaign (the Lambâ€™s War) against the established church and the Commonwealth Parliament. They disrupted church services, confronted the clergy, disputed with opponents in public, refused to show deference to their â€˜superiorsâ€™, staged startling happenings such as â€˜going naked as a signâ€™, and dispensed threatening prophetic warnings to those in power. Not surprisingly, they were regarded by those in power as a very serious threat to social order at a time of great political turmoil. This is why they made an example of James Nayler and used his actions as an excuse to persecute the Quaker community as a whole.

What provoked radical groups such as the Quakers was the failure of the commonwealth regime to deliver the promises made during the English Civil Wars that victory would lead to far-reaching social, political and religious reform. The expectation that a new society would be created based on greater equality, democracy and religious freedom was disappointed. For much of the period, the country was under military dictatorship, dissenting groups were persecuted and the army was busy slaughtering thousands of people in Ireland. In these circumstances to hold James Nayler responsible for his punishment and the persecution of the Quaker community is simply to blame the victim. Naylerâ€™s behaviour at Bristol was entirely consistent with the essential character of the early Quaker movement. His actions involved no violence, no coercion and no threats to people or property. He simply enacted an outward physical sign representing what he had found to be true inwardly and spiritually.

It was those in power who illegally tried James Nayler and tortured him almost to the point of death. It was those in power who flogged Quakers in the market places, locked them in the stocks and the pillory, provoked mobs to attack them and threw them into disease-ridden dungeons at the mercy of brutal jailors. The time has come to stop blaming the victim and instead defend James Nayler as a Quaker hero, justice-seeker and role model.

This article was first published by Stuart Masters on his blog, A Quaker Stew. Visit http://aquakerstew.blogspot.co.uk/2012/03/why-do-we-blame-victim-in-defence-of.html to read the article on Stuart’s blog.

11 thoughts on “Why do we blame the victim? In defence of James Nayler”