The 2012 Swarthmore Lecture by Rachel Brett, reviewed by Mark Hoda

It was therefore fascinating to listen to Rachel Brett explain why and how the Quakers work at the UN for this year’s Swarthmore Lecture.

Brett opened by explaining that the Quaker belief that there is something of God in everyone means they seek to promote peace, justice and non-discrimination at a UN level.

Quakers have a very particular role to play as a non-government organisation (NGO)Â in consultative status with the UN. Rather than divide countries into ‘good’ and ‘bad’, Quakers are willing to meet with and listen to all: to hear any contributions, without confrontation and antagonism. This does not mean that they lose their principles or do not challenge what they disagree with, however.

This open approach means QUNO are able to bring people together as equals, particularly at Quaker House lunches, who would otherwise not meet, in the neutral, informal, confidential space of the QUNO Meeting House. Rachel Brett explained how staff at QUNO pay great attention to details, particularly their lunch menus, to create a conducive atmosphere.

As for any campaigning NGO, achieving change can be slow and frustrating process for QUNO and there are failures as well as successes, hence the â€œsnakes and laddersâ€ title of the lecture. However, in both the lecture, and accompanying book, Rachel Brett outlined how the Quakers have affected real change on vital, but often neglected human rights issues, such as child soldiers, women prisoners, children of prisoners, the death penalty, conscientious objection, torture, the right of indigenous people and refugees.

Rachel Brett’s Swarthmore Lecture highlighted the vital work Quakers do to support the values of the UN through their networking, research and advocacy and by creating a unique atmosphere to stimulate dialogue and build trust. I thoroughly recommend her Swarthmore Lecture book as an antidote to the despair that media coverage on the UN can generate, with its focus on intractable diplomatic wrangling over brutal conflicts, as in the case of Syria currently. As Rachel Brett observes â€œThe UN may be a flawed organisation which often does not live up to its ideals, but this can be seen as a reason to work with it and try to improve it, rather than one for abandoning it.â€

Mark participated in the Quaker UN Summer School in 2001. He is chair of the Gandhi Foundation and secretary of the Jeevika Trust.

The 2012 Swarthmore Lecture by Rachel Brett is available for purchase from the Quaker bookshop as a paperback or in electronic formats.

You can donate to the Quaker UN Office work at http://www.justgiving.com/dayofdiscussion. 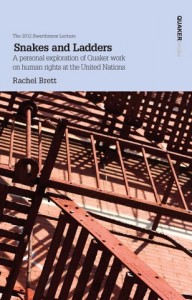