â€˜Good luck in that godforsaken placeâ€™

Those were the words a colleague of mine was left with by a friend as she left her office in the UK for the last time before joining the Ecumenical Accompaniment Programme in Palestine and Israel (EAPPI).

I too am serving in the West Bank as a human rights observer with EAPPI. And this weekend I had some days off, so I thought Iâ€™d attend some religious services that would give me the space to look for God in this place that, as my colleagueâ€™s friend suggests, can often feel like sheâ€™s packed her bags and left.

To start with, on Friday evening I attended a prayer vigil that marks the end of my week on a regular basis. Whilst numbers can vary, there are stalwart folk who attend week in, week out. These include Franscican Sisters who run the local baby hospital, members of the Christian Brothers order that are based in Bethlehem, and Clemence, my Arabic teacher and the lady whose house is closest to the wall â€“ the separation barrier â€“ that runs round most of Bethlehem. 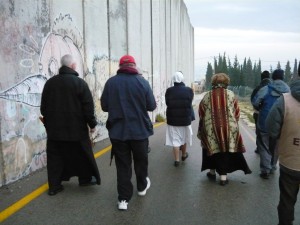 These faithful people have been walking back and forth, back and forth, praying along a length of this wall together for eight years now: every Friday evening, at 5.30pm, without fail. Together we say the rosary in English, Arabic, and whichever other languages are represented there that week. Praying the rosary is entirely new to me, and perhaps in other contexts would feel uncomfortable. But after some weeks (and becoming sure that I know the words), it has become a welcome devotion to end my week. Saying â€œpray for us sinnersâ€ is unlikely to have as much resonance anywhere else for me, as we walk along a barrier that divides one people from another.

For Clemence it must also be a particularly powerful statement. The wall and the checkpoint that sits within it stand on Clemencesâ€™ land, confiscated to construct the separation barrier almost a decade ago. I feel blessed to have this opportunity to stand in solidarity with her, and the others present who are, entirely non-violently and serenely (although we Iâ€™m sure they do not always feel it) making a public (the prayer is seen by soldiers and security guards at the checkpoint) and private (through their intercessions) show of resistance against the separation barrier and the divisions it entrenches.

Next, my Sunday morning was spent in Ramallah, with the small group of people who make up the Quaker Meeting there â€“ the only one in the whole of Israel and the occupied Palestinian territories. I found a warm and welcoming Meeting. We were two at the start, and gradually swelled to nine by the end of the hour. What with the tea and chat afterwards, the mostly American, British and Canadian accents found there, and the copious notices at the end, it felt wonderfully familiar! If Iâ€™d temporarily forgotten where I was however, returning to Jerusalem through the Qalandia checkpoint brought my slap bang back to the occupied Palestinian territories.

Finally, on Sunday evening I attended a TaizÃ© service in West Jerusalem. Jerusalem is invisibly divided between East and West Jerusalem. Until 1967 Israelis and Palestinians lived most separately, either side of the â€˜green lineâ€™ â€“ the armistice line at the conclusion of the 1948 Arab/Israeli War. In 1967, during the Six Day War with Egypt, Jordan and Syria, Israel occupied East Jerusalem, along with the West Bank, Gaza Strip, Golan Heights, and Sinai Peninsula. Out of all these occupied territories, Israeli has also annexed East Jerusalem.

Sunday night was my first walk through the Israeli side of the ancient city. Walking through West Jerusalem (the Israeli side), upon every face that I looked, I couldnâ€™t help thinking â€œyou have been in the armyâ€, â€œyou know how to fire a gunâ€, or â€œwhen you grow up, youâ€™ll be in the IDFâ€ (the Israeli Defence Force).

The Israeli army relies on conscription of people for two or three years from the age of 18, and then again for one month a year every year, often until their early â€˜50s. Some groups are exempt from this, including women with children, those not â€˜physically and psychologically fitâ€™, the 20% of Israeli citizens who are Palestinian, and the Haredim (an ultra-Orthodox, conservative Jewish group) – an exemption that is becoming increasingly controversial.

Incidentally, organisations accused of inciting people to refuse to serve in the Israeli army have suffered severe repression, including, in the case of New Profile, a year-long investigation that included raiding the homes of members, detaining and questioning them without charge, and confiscating documents and computers â€“ this represents a â€˜serious violation of freedom of expressionâ€™ according to a Association of Civil Rights in Israelâ€™s 2009 report.

To return to my spiritual weekend: TaizÃ© prayer is a form of service that stems from a religious community (funnily enough, in the town of TaizÃ©), in the South of France. Their simple workshop includes the singing of short repetitive songs, often in canon form, long spells of silence, and some reading of scripture. I normally love the singing in particularly, and as a Quaker the silence feels deep and centred, but last night, the words of the chant â€˜Da pacem Domine, da pacem O Christe in diebus nostrisâ€™ (Give the peace God, give your peace o Lord, in our days) felt hollow and unheard.

At the end of the weekend Iâ€™m back where I started, both geographically and spiritually! I didnâ€™t get a lightning bolt revelation of divine feeling about being in the Holy Land. But now I think about it, when I stand at the checkpoint at 5.00am of a morning, and see a person in front of me – in front of all their fellow Palestinian workers and the Israeli soldiers – find a plastic bag or piece of cardboard box Â on which to bow down to Allah when the call to prayer is sounded (when s/he has probably had to get up at 2.00am in the morning, to wait in line for hours in order to get to work), well then maybe Iâ€™ll find the Spirit at work right in front of me.

Hannah Brock is serving for three months with the Ecumenical Accompaniment Programme in Palestine and Israel (EAPPI). EAPPIÂ brings internationals to the West Bank to experience life under occupation. Ecumenical Accompaniers (EAs)Â provide protective presence to vulnerable communities, monitor and report human rights abuses and support Palestinians and Israelis working together for peace. When they return home, EAs campaign for a just and peaceful resolution to the Israeli/Palestinian conflict through an end to the occupation, respect for international law and implementation of UN resolutions.