By Robert Cohen
The story so far…
So, the Palestinians have failed in their attempt to gain full statehood recognition through the UN Security Council. Even if they had achieved the nine votes required, we know that the United States would have used its veto to turn the win into only a moral victory. The General Assembly can now have its say but can only vote on a lesser status than full statehood for the Palestinians.
Of course, even if the statehood bid had been successful it would have done little to change the reality on the ground for Palestinians. In fact, it could have made things worse, depending on how punitive Israel wished to be. A General Assembly vote to enhance Palestinian status at the UN could yet cause more problems. Look at Israel’s reaction to the UNESCO admittance vote last month. Palestinian funds withheld, settlement building speeded up in the West Bank, and further expansion of the ‘eternal’ and ‘unified’ Jerusalem announced. Meanwhile, the Netanyahu administration seems determined to undermine Mahmoud Abbas, the Palestinian Authority President, despite him being the most moderate Palestinian leader currently on the stage. No wonder Obama and Sarkozy were caught on mic swapping frustrations about the intransigence of Bibi Netanyahu.
However, the UN vote strategy has not been without its critics among Palestinians. For a start, it puts to one side other critical issues such as the status of Palestinian refugees living outside of the Israeli Occupied Territories and the condition of Palestinians living within the State of Israel. Overall though, the strategy has been a useful one. Israel and the United States have found themselves on the back foot and out of step with the majority of governments around the world. For the first time in years, the Palestinians have taken the initiative with a bold, peaceful move to secure international acceptance for their cause.
Prompted by the failure to win acceptance within the Security Council, there now appear to be fresh moves to negotiate a workable Fatah/Hamas unity administration across the West Bank and Gaza with elections next spring.So where does all of this leave those of us who wish to see a resolution to the century old conflict between Jews and Palestinians? What will put us on the path to justice, reconciliation and the peace that comes from mutual respect and understanding? As individuals, what can we do to bring this about?
Up to now, Micah’s Paradigm Shift has stepped back from any support for the Boycott, Divestment, Sanctions, (BDS) movement launched by a broad alliance of Palestinian civil society in 2005. For a start, I doubted the general public was ready to understand the complexity of the conflict. Could it be explained and understood in the same way that the Anti-Apartheid campaign was in the 1980s? And if it could be explained, would it make any difference to the lives of Palestinians? Finally, would support for BDS be an act of treachery for any Jew wanting to profess solidarity with the Jewish people?

In short: Can it be kosher to boycott?
Below are some Frequently Asked Questions about the BDS strategy and some answers from Micah’s Paradigm Shift.
Here’s what I’m going to tackle.

I hope by the end to convince readers of this blog that the time has come to support the BDS call, as well as a campaign of non-violent resistance to the occupation. Because doing so will be good for both Palestinians and for Jews. Your responses, as ever, are most welcome.

‘…for the benefit of all its inhabitants; it will be based on freedom, justice and peace as envisaged by the prophets of Israel; it will ensure complete equality of social and political rights to all its inhabitants irrespective of religion, race or sex; it will guarantee freedom of religion, conscience, language, education and culture; it will safeguard the Holy Places of all religions; and it will be faithful to the principles of the Charter of the United Nations.’

But at the heart of this founding document is a fundamental contradiction. How can a state that defines itself as ‘Jewish’ and sets in place Basic Laws that significantly disadvantage non-Jews, ever hope to create a genuinely democratic state of all its citizens on the British, French or American model. Israel has to become the State of Israelis and not the State of the Jews. That does not mean that it cannot continue to be a centre of Jewish culture and learning but it must also be a truly pluralistic society that honours and protects all of its people, just as its founding document promised. Any neighbouring Palestinian State must, of course, be established on the same basis.
So BDS does not have to ‘delegitimise’ Israel or Israelis. It does, however, need to delegitimise the present concept of a Jewish state. That, of course, calls into question the entire Zionist project since Theodor Herzl and will demand a monumental change in mainstream Jewish thinking.
Some final thoughts
The key message of BDS must be that this is a peaceful, international act of solidarity with the Palestinian people who are asking only for the same rights enjoyed by Jews. In Israel\Palestine itself, a campaign of peaceful civil disobedience and resistance to the occupation by Palestinians, and their Jewish Israeli supporters, will begin to win over the hearts and minds of Western electorates that could change the international political dynamic over Israel. The attempt by Palestinian activists to echo the ‘freedom riders’ of the American civil rights movement by boarding ‘Jewish only’ public Israeli buses that link the West Bank settlements to Israel could be an important step in this strategy. 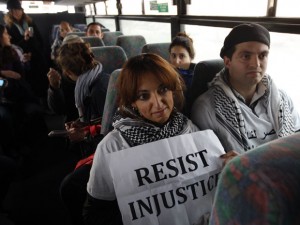 In the long run, I believe a post-Zionist Israel will be to the distinct advantage of both Palestinians and Jews. If the Zionist aim was to ‘normalise’ the condition of the Jews in the modern world then it has it been a spectacular failure. Israel, as it is currently constituted, has become the problem and not the solution. In the 21st century, growing beyond Zionism must be the way forward. We must aim for and nurture not a Judaism of narrow nationalism but a Judaism that embraces the justice envisaged by the biblical prophets of ancient Israel (Micah included!). We must promote a Judaism that learns the right lessons from its own painful history. Championing the rights of Palestinians is not only a moral imperative but the Jewish route to healing a fractured world.
Whether all of this is achieved through two states or one, or two states that eventually become one, I do not know. What I do know is that we should not fear such possible futures but embrace opportunities to build a beacon of trust and mutual respect in the Middle-East. Let Israel become a ‘Light unto the Nations’ rather than a darkness at the heart of Judaism.
Robert Cohen blogs at Micah’s Paradigm Shift – Israel-Palestine from a non-Zionist progressive UK Jewish perspective – where this article was first published.