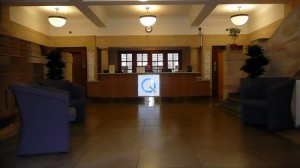 Asked why he had taken the job of recording clerk Paul said: “It felt like time to do something for the Quakers.” He explained that he has been involved with Quakers for about 25 years. It is an exciting thing to do, Paul said. He explained that Quakers are not a hierarchical religion and are run by members. The recording clerk runs a team of staff and they try to deliver in the world what the Quakers want to see done.

Talk us through the average day of the recording clerk, asked the interviewer. “Well I havenâ€™t started yet so I donâ€™t knowâ€¦” replied Paul. But he did go on to explain that he would be listening to what Quakers want and talking to people around the country. He added that making sure that the Quaker messages s heard in the world is important, as well as working with other churches where the is common ground.

Paul talked about principles of equality including that “Quakers believe that everyone is of equal worth” and that Quakers were involved in ending the slave trade. “In 2009 we were of the first churches to be willing to celebrate same sex marriages. Weâ€™ve got a lot to say that is very relevant in the 21st century.”

Paul recounted that when he first came to Quakers he was asked what he believed rather than being told what to believe. He explained that thereâ€™s “a real appetite out there for something spiritual and lots of people are looking for something that they can participate where they can explore together with other people what they believe in.”

Paul is currently an assistant headteacher and says that he is staying on at his school to see his students through exams, then will take up his role of recording clerk after that.

The interviewer rounded off by saying “Paul Parker who will become the new recording clerk in the Quaker society.” So still some way to go to get our messages across completely.

The interview is available on BBC iplayer until 18 December. Visit http://bbc.in/PaulParkerinterview and listen from approximately 1 hour 39 minutes in.