A Friend was recently perusing the internet to find out the origins of Tottenham cake. They came across a wikipedia entry that says that the Tottenham cake was sold originally by a Quaker baker, Henry Chalkley. He sold the cakes for 1 old penny each mis-shapen cakes were sold at half the price. The pinkÂ icing comes from mulberries that were growing in the Tottenham Friends Burial Ground. According to Tottenham Quakers, Ted Willis wrote in his autobiography: “a peculiar local invention was Tottenham Cake. It consisted of a scone like base covered with lurid pink icing. It was baked in long flat trays, then cut into cubes, which retailed for a penny each. Luckily the cake was not always cut evenly or the icing uniformly spread, and the smaller defective pieces were sold off at half price. 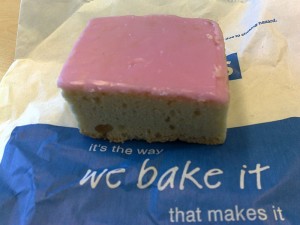 In 1901 the cakes were given away free to celebrate the Spurs‘ victory in the FA Cup final against Sheffield United. Perhaps this link to Tottenham Quakers means that Spurs have as good a Quaker connection as the Darlington team, whose nickname is the Quakers.

According to the Tottenham Quakers website, a Friend still cooks the cakes for the Quaker Meeting.