Quaker pilgrim Ken Schroeder joined local Friends for meeting for worship on Saturday in Congenies, in southern France, having arrived in the village the day before on pilgrimage from Portugal to Egypt.

Ken set off on his walk from Porta legre in Portugal in 11/2012. He is walking to promote peace in the Middle East and the work of Masterpeace, a non-government organisation, which plans to hold a peace concert on the international day of peace (21/09) in 2014. The concert will take place at the Giza pyramids in Egypt and musicians from conflict regions of the world will perform.

Ken and his daughter completed the first 1,000 kilometres together, also walking in Spain and northern Africa as well as Portugal. His daughter then returned home and Ken, who is a member of Ohio Yearly Meeting, crossed back to Spain and has since walked up to France and across to Congenies.

Having set off with just 200 Euros in his pockets, Ken is walking in faith, relying on the generosity of supporters and strangers. He estimates that he is spending around 120 Euros per month.

Although Friends in Congenies usually meet for worship on Sundays, they also meet on the second Saturday of the month for worship followed by a shared meal together. This weekend, American and British Friends joined French, British and American locals for worship. For Ken the worship was particularly special because, as an isolated Friend in Portugal, he does not often have the opportunity to worship with other Quakers. Ken will spending about a week with Friends in Congenies, having a much appreciated break.

Ken is not the only person walking to Egypt to promote Masterpeace. Wijnand Boon set off in 09/2011 from his home in Leiden, The Netherlands, and inspired Ken when he walked through Ken’s home village in Portugal.

You can follow Ken’s blog at http://downtoegypt.blogspot.co.uk/ and listen to a Nayler interview with Ken, where he talks about following a leading and walking in faith, in the 14th Nayler podcast. Congenies Friends Meeting House is also a guest house. 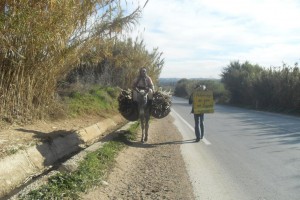