A left wing Quaker Christian commentator has announced that he intends to walk from Birmingham to London in June and July 2010 as a ‘pilgrimage of repentance’ for his former homophobic attitudes.

Symon Hill, the associate director of the Ekklesia thinktank, will minister at churches along the way. He hopes to encourage the entire Christian Church ‘to repent of homophobia and think differently about sexuality’. He intends to arrive in London on 1 July 2011 and take part in the London Pride march on 2 July.

Symon Hill said: “I have struggled for years with issues of sexuality – through prayer, reflection, personal experience and reading the Bible. These struggles have led me to the conclusion that it is not homosexuality, but homophobia, that is sinful and contrary to the message of Christ.

“Many churches continue to reject loving same-sex relationships and to oppose equality. Others have failed to speak out due to a misplaced desire for unity. Given the hurt and abuse involved, minor changes are not enough. As Christians, we are called to take a stand against injustice.”

Writing on his repenting.wordpress.com blog Symon said: “I had no problem with homosexuality or bisexuality before I became a Christian. But I chose to support a narrow homophobic position, partly out of a desire to fit in at the church I had joined. I stifled doubts about the flimsiness of the arguments used to back up hostility to same-sex relationships. Although that church played an important role in guiding me towards Christ, I am now convinced they were severely mistaken about sexuality.

“As Paul repeatedly tells us, Christ fulfils the Law and makes it possible to live by God’s Spirit. It is this Spirit, not the values, priorities and prejudices around us, that we are called to follow. Discerning God’s leadings is far more challenging than relying on convenient rules, but it must be possible if we trust in the power of the Holy Spirit.

“The Bible is a source of God’s dynamic guidance that points us towards Christ, yet we so often devalue it by treating it as a human rulebook, from which lines can be snatched out of context to back up prejudices. Lines relating to homosexual prostitution are twisted to condemn loving same-sex relationships. This is as unfair as opposing heterosexual marriage on the grounds of verses condemning adultery.”

Symon Hill plans to cover up to 200 miles in three weeks. The walk has the backing of Ekklesia, the Lesbian and Gay Christian Movement, Courage UK and Inclusive Church. Symon is also news reporter for The Friend and is an associate tutor at the Woodbrooke 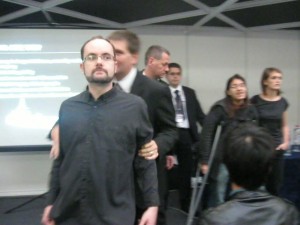