London Quakers continued their witness alongside Occupy London on Sunday afternoon, with around 50 Friends and others taking part in a Meeting for Worship by the encampment. Their presence has been boosted by a statement of support from Oxford Quakers.

During the Meeting for Worship one Friend sat holding a sign explaining what a Meeting for Worship is and another held a brightly coloured banner declaring that Quakers are ‘for peace’. The rest stood or sat in a rough circle, with passersby also joining in with the worship. 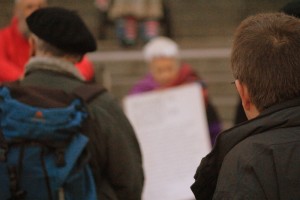 There were two ministries during the Meeting for Worship. The first acknowledged that the worship was taking place on remembrance Sunday and calling for action for social justice, as without this peace cannot come. The second was a reading of a minute from Quakers in Oxford, who have welcomed the statements of Christian and Jewish solidarity with Occupy LSX and gave their support for OccupyLSX as ‘a healthy protest at unjust equality in our economic system and a site of lively discussion of fairer alternatives’.

As well as agreeing the statement, Oxford Quakers undertook to write to the bishop of London and the dean and chapter of saint Paul’s cathedral, offering their loving support for their courage in discerning what Christian principles require of them in this situation.

Quaker Ian Chamberlain was a witness on the Moral Maze radio programme this week, representing the protestors at OccupyLSX. Ian, who has been staying at the camp since mid-October, has been inspired in his activism by his grandfather who, Ian says, â€œled a modest, gentle, humble lifestyle. He was a conscientious objector and in the Friends Ambulance Unit.â€

Quaker witness at OccupyLSX has not met with universal approval. Oliver Coss, writing on his blog The Vicar of Purgstall, wrote that the first Meeting for Worship in support of OccupyLSX and outside saint Paul’s cathedral â€œwas a massive PR snub to both the Church of England and Christianity at large and an endorsement of the condemnation of St. Paul’s as an organisation in collusion with the 1%.â€

The statement of support from Oxford Quakers reads:

â€˜Oxford Local Quaker Meeting welcomes OccupyLSX as a healthy protest at unjust inequality in our economic system and a site of lively discussion of fairer alternatives. We welcome the statements of Christian and Jewish solidarity with OccupyLSX. We welcome the ecumenical services taking place at Occupy LSX. We uphold those Friends who have chosen to hold meetings for worship on the steps of St Paulâ€™s as Quaker witness in, and in solidarity with, OccupyLSX.â€™ 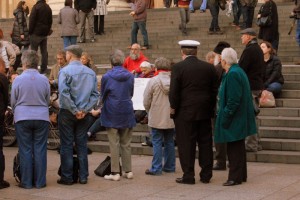