Quakers in Britain and the US have made public statements highlighting their concerns about the violence in Libya. While Quakers in Britain have written an open letter to the UK prime minister, American Friends Service Committee has made a statement making demands of the Libyan government, coalition forces, the United Nations, the African Union, and the Arab League and all parties to the conflict.

The full text of the Britain Yearly Meeting (signed by the co-clerk of Quaker Peace & Social Witness) letter is as follows:

The Religious Society of Friends (Quakers) in Britain is dismayed that Britain is again directly involved in military activity, this time in Libya, while it continues with military action in Afghanistan. We grieve at the loss of life and the misery inflicted on all those affected by war.

We see war as intrinsically wrong. It is wrong because it treats people as being expendable. We see each individual as being unique and precious and carrying within them something of God.

We recognise that others do not share this view and that many well-meaning people were willing to see this particular military action begin in the hope that it would save civilian lives. We respect their motives. We have however seen, over and over again, the arguments used that ‘we must do something’ and that this time what is planned will be brief and clinical. But the truth is so often very different – violence tends to escalate, and it is much harder to end a war than to start it. The bitterness and hatred caused can last for generations. All this we ignore at our peril.

Quakers applaud the efforts made by the United Nations to reach a solution to the satisfaction of all parties in the region of North Africa, and we are deeply disappointed that a nonviolent solution could not be reached in Libya.

This year, 2011, marks 350 years since Quakers first declared our conviction to Charles II that as a Religious Society â€œall bloody principles and practices we do utterly deny, with all outward wars and strife and fightings with outward weapons for any end or under any pretence…â€

Since that time Quakers in Britain and around the world have worked for peace and social justice, with the aim of making this world a better place for all. As Quakers in Britain we ask the Government to look critically at the role it plays in increasing instability in the world, particularly through the very substantial support it provides for the arms trade.

We uphold all those in positions of responsibility at this crucial time, praying that they will at least exercise all possible restraint.

The full text of the American Friends Service Committee statement is as follows:

Call for nonviolent alternatives to end the conflict in Libya

Eight years ago, on March 19, the United States led the attack on Iraq.Â This year, on that same date, US forces, in conjunction with those of other countries, embarked on an aerial assault of another Arab country, Libya.

The American Friends Service Committee is appalled by the countless deaths, the untold suffering, the displacements of people, and the physical destruction in Libya. We pray for those who have already lost their loved ones through violence, whatever may be the source.

Our long experience in the Middle East and Africa, along with our Quaker witness for peace, compels us to speak out about the crisis in Libya. Â We deplore the violence and killings inflicted by Qaddafiâ€™s government on its citizens, as we abhor the actions of any government that places their own self-preservation above the well being of their people. Â However, our revulsion does not justify violence, or war.

Our experience has shown the futility of challenging violence with violence.Â  We have seen that history has proven time and again that war and violence do not bring about justice or a lasting peace.Â  Instead, they always take a terrible toll on civilians.Â  This is why, as a Quaker organization, we advocate for nonviolent social change.

We support the people of Libya as they struggle to protect their human rights and to transform unjust social and political systems in their country.Â We note that in Egypt and Tunisia, remarkable change has been achieved in a short time with minimal violence or outside intervention.Â  Recent history shows how nonviolent approaches can prevail to overcome extraordinary oppression.Â  Unlike military action from another country, these approaches serve the people over the long term.

In addressing the serious issues of international peace and security, we urge the use of non-military methods by all involved. In this case, the international community has not exhausted the available nonviolent alternatives to protect the people of Libya. The significant resources required by the chosen course of military intervention could be better used for intense diplomatic and political efforts to alleviate the crisis.

We believe that it is morally unacceptable to allow military tactics to lead our response to human crises. The current foreign military assault on Libya is a step in the wrong direction, one that may lead the country to further instability, human suffering, and protracted violent conflict. Â 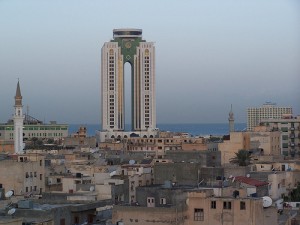 Quakers in Britain and the US have made public statements highlighting their concerns about the violence in Libya. While Quakers in Britain have written an open letter to the UK prime minister, American Friends Service Committee has made a statement making demands of the Libyan government, coalition forces, the United Nations, the African Union, and the Arab League and all parties to the conflict.

One thought on “Quaker statements on Libya”