The news comes as the cathedral staff announced that they are not taking legal action against the protestors and the corporation of the city of London announced a suspension of its own legal action.

As well as attending the Meeting for Worship, some Quakers are camping with OccupyLSX and others have given material support to the protestors. Meanwhile Stevenage Quakers and Nayler have stated their support for the Christian solidarity with Occupy LondonÂ statement.

Other groups have been providing their own form of support as a flashmob meditation took place on the steps of the cathedral last week. 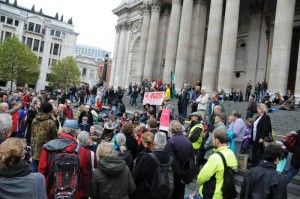