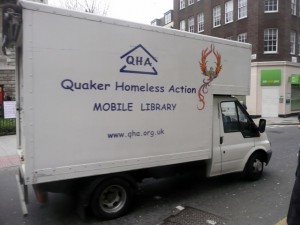 Â â€œI havenâ€™t bought any books for ten years. You canâ€™t keep a bookcase in a doorway.â€

It is a few minutes before two oâ€™clock on a Saturday afternoon. Iâ€™m loitering by a church in central London, waiting for the volunteers from the Quaker Homeless Action mobile library to turn up and begin the afternoon shift. My companion and another man are waiting with me, but theyâ€™re not here for books. The Simon community use the same space to hand out hot food to all-comers.

A few streets away, at the bookshop Foyles, free books are being given away in a promotion that is a part of World Book Night. In order to qualify for a free book I had to give my name, my email address and my postcode.

At the Quaker Homeless Action mobile library all borrowers need is a name. Some give their first name when they take out a book, others give a last name too.

I had met up with the morning shift of the mobile library in another location in central London. The van was parked a few metres away from its usual spot to avoid a large pool of vomit that was being greedily pecked at by undiscerning pigeons. We huddle together in the street, making use of a nearby cafe for hot drinks. Down the street a huddle of homeless men are gathered.

Birgit and Emily have been helping out with the library for around a decade, while Richard is the relative newcomer at seven years. All three have full-time jobs. Richard, the driver, had to be up early to pick up the van from the garage in south London where it is safely stored. He told me that he does the first shift driving as heâ€™s not really an early person and it gets him out of the bed in the morning. Later Birgit and Emily told me that Richard makes a good driver because he is patient on the road and doesnâ€™t get frustrated in traffic.

Our visitors in the course of the morning were all men. Mostly they wanted crime or â€˜true crimeâ€™ books, or some fantasy. For a while sport books were also popular, but all types of books are asked for from Roald Dahl to Latin grammars. One man stopped by and asks if we have any books in Lithuanian. After some rummaging about one is found. It is by Joanna Trollope. Richard and the Lithuanian-reader shared a joke about romance novels. Our would-be borrower had a good look at the book but declined to take it out. Iâ€™d also rather have no book than one by Joanna Trollope, so I understood where heâ€™s coming from.

The library has a wider range of other books, notably Russian and Polish, but theyâ€™re short on several other languages, such as Czech. And the Russian books that they do have look quite old. They could do with a few more books in each of these languages, particularly in the same genres that are popular in English.

While standing around in the cold I met quite a few men. We exchanged pleasantries. One offered to sell me his guitar for 2p. But I donâ€™t want it, I say, because it will be wasted on me. Another, Hamed, had a story of how this morning he went to get off the bus but he had a big bag with all his possessions and it took him a while to get to the door. And he was travelling with a friend who, he says, has a broken leg. Just as he got to the door the driver shut the door and began to pull away. Hamed protested and the driver braked sharply, then accelerated and braked again, all the while calling this man and his companion â€˜scumâ€™. Hamed was visibly shaken and angry. What can he do, he said. He noted the bus details but what good is that?

Later, the man who is said to have the broken leg called me over. He was sitting with his dog. Could I find him something that is profound and obtuse? He reckoned that Iâ€™m up to the challenge but Iâ€™m not so sure. He didnâ€™t want fiction. The volunteers had a search as they know the collection better than I do. They came up with a title that wonâ€™t be missed if it isnâ€™t returned and Richard takes it over to him and gets his name to sign out the book.

Thereâ€™s an eclectic mix of non-fiction and it reminds me of the libraries in Lewisham that I occasionally visit although I rarely find anything that I want to read. And when I do get a book out, invariably I donâ€™t pass a Lewisham library again for over three weeks and have to make a special visit to return my book and pay the fine. Here there are no fines.

Outside, as well as attention from the homeless, there were other passers-by. One smartly-dressed woman has two copies of Beloved by Toni Morrison that she wanted to donate because as part of the World Book Night events. But the offer was turned down as it doesnâ€™t really fit with what the library needs. A donation is one thing, but the right donation is sometimes something different.

Another couple passed by. Theyâ€™re intrigued and paused to look in, but from a distance. I greeted them but they donâ€™t respond. They walked further up the street and turn and look again. Perhaps theyâ€™re admiring the beautiful phoenix painted on the side of the van. The original vehicle was burned out one night, so the current one is the replacement. The phoenix rising from the flames. Painted in beautiful colours by Gill Lowther, the projectâ€™s coordinator.

After an hour or so the volunteers raised the stairs back into the van, put the guards on the shelves to stop the books falling down during transit and were off to their next stop. I couldnâ€™t travel with them, for insurance purposes, so I took a bus.

Once aboard, I climbed the stairs and sit at the front, as I always like to do. The woman next to me was reading a photocopied chapter of a book â€“ â€˜The subject of freedomâ€™. I asked if I could take a photograph and although somewhat perplexed the woman agreed. I explained to her that something resonates with what sheâ€™s reading and noting with what Iâ€™m doing and I told her about the mobile library and the Book Day. It turned out that she has worked in Kenya with Africa Soma, an organisation that sets up community libraries. We discussed how the books that people donate and the ones that people want arenâ€™t necessarily the same thing. And we talked about how nomadic people may have different needs to settled residents. 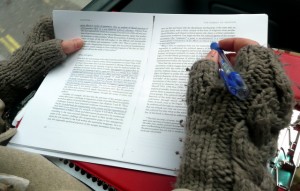 At the second morning stop we had no takers and it was still rather cold. We talked about all sorts of things, from our favourite books of the year so far to the state of the National Health Service.

The morning shift finished and Brian, the driver for the afternoon, appeared to take over. Iâ€™m back on the bus, then wandering around town and taking a leisurely lunch. I receive a flyer in the street for the Foyles promotion and head to the store to claim a copy of John le Carreâ€™s The spy who came in from the cold. Of course, the homeless donâ€™t always have that opportunity.

During my break I spent Â£35 on five books â€“ three Harry Potters, a true crime book and an Andy McNab. I add them to the pile for processing though I learn that usually QHA prefer donations to be processed through their store first. An exception is made for my books this time and theyâ€™re soon up on the shelves. I had also looked at contemporary foreign-language fiction in Foyles, thinking that I could bolster the Czech, Polish and Russian shelves. But at around Â£20 a go I was soon put off.

The afternoon shift is much busier, not least because of the free food across the way. This is a mixed group and one woman asks me to help her find some Mills & Boon. It turns out that the library has a romance section and Iâ€™m able to pull out some Mills & Boon and another from a similar series.

Another borrower returns two books and takes out two more. The previous night he was at the World Book night event in Trafalgar Square and heard Margaret Atwood and others speak.

One of the volunteers, David, tells me that he volunteers because the library and its staff were so important to him when he was homeless. Another, Rachel, is a little shaken up after talking with one man. His mannerisms are similar to her fatherâ€™s, but a couple of different life choices and this man is out on the streets. Usually, we never know how close we are to homelessness until we end up with nowhere to go. But David knows and Rachel can see it.

The Quaker Homeless Action mobile library does not on the face of it provide a life-saving service. It doesnâ€™t provide any medical services, nor supply food. But it does still provide something important â€“ recognising each individual who crosses the threshold as human, as someone who might just want to read a book. For although many of us take for granted the easy availability of books, if you donâ€™t have an address you often canâ€™t sign up to a local authority library and take out a book. Youâ€™re cut off from that service. In yet another way, society doesnâ€™t recognise you.

Passing the time, I notice that although the books are broadly in alphabetical order, theyâ€™re not precisely so. I spend the next 45 minutes or so carefully sorting out the fiction. By the time the volunteers are packing up Iâ€™m up to L. Itâ€™s a job that I could happily continue next time. 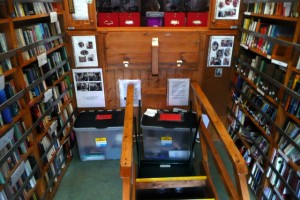 Packing up after a day of lending. Photo: Jez Smith

And with that observation I realise that Iâ€™m not just going to stop here (Iâ€™m writing another article about the Quaker Homeless Action mobile library and interviewing a voracious reader who lives on the streets for that one). Iâ€™m going to come back and observe some more shifts â€“ you have to observe at least three times before you can apply to become a volunteer â€“ and then see if I can join the rota. It shouldnâ€™t be difficult, as Birgit explained earlier â€“ the library is there every other Saturday, but if they had more volunteers (especially more drivers) then they could possibly be there every week. They also do Monday afternoons and Tuesday nights at different locations in central London. Iâ€™ll only need to commit to one shift every 4-6 weeks, more if I want. If anything, Iâ€™m slightly surprised that the library needs more volunteers â€“ here is a project quietly witnessing on the streets of one of the biggest cities in the world. There should be waiting list to volunteer. Perhaps with your help, theyâ€™ll get there.

To learn more about the work of Quaker Homeless Action and their mobile library visit http://www.qha.org.uk.

Some names have been changed.