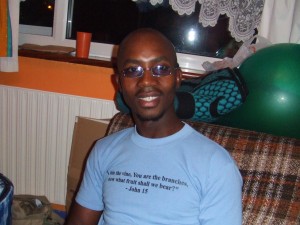 Why are you a Quaker?

There is no single answer to the question of why I am a Quaker. But in simple terms I can respond by saying I decided to become a Quaker because I was inspired by the principles that Friends follow as a guideline for their lives. I came into contact with Quakers in 1998 when a group of Young Friends visited Lesotho to hold their Camp through which they carried out different activities most of which were charitable. A Friend who was hosting these Young Friends, Carol Urner, now back in the United States of America, was the one who invited me to join this group of young people since I was one of the youth activists and had vast interest in youth related issues. Carol also inspired me by the manner in which she conducted herself and cared for others. I began to develop interest in Quaker Meetings even though at first I found them quite strange. It was through attending these Meetings (Worship Meetings) that I got to understand what Quakers mean by values or testimonies of Peace, Love, Community, Simplicity, Integrity, Honesty, Truth and Caring for the environment. As I read more about these values of life, I began to feel and understand a spiritual connection between what I do (my actions) and what I believe in (my faith). Since I am naturally a â€˜loving and caringâ€™ person, I made a choice to adopt these values in everyday life in order to live amicably with other people and my environment. I must say however that this has never been easy for me because itâ€™s like being required to lead a flawless life in the kind of world that we live in. But a sense of supportive community among us as Friends, from my Meeting and Yearly Meeting always makes me feel anchored even when the â€˜evilâ€™ forces of the secular world are fighting against me. As I grew in my Quaker beliefs even though lately I havenâ€™t been actively involved in Meetings, I also got inspiration from early Quakers whom I read and researched about. One of them is James Parnell, who at the young age was actively involved in preaching the word of God in very difficult and tormenting conditions. The courage that they had to stand for what they believed and to become advocates of Justice, Truth, Love and Peace is one of the reasons why today I am a Quaker â€“ itâ€™s an inspiration. Today I have made a conscious decision that being a Quaker should be a central part of my lifestyle. Again it is not easy, but with Faith and continuous prayers I believe it can be possible.

How are you a Quaker?

It is important to mention that I was not born a Quaker as my response to the previous question suggests. But I was born a Christian, I was brought up in the Lesotho Evangelical Church to which I still subscribe even today. I must admit though that I no longer attend church as I used to when I was young. I still hold the values that I was taught by my mother. And these are Donâ€™t lie to anyone, donâ€™t cheat, donâ€™t throw stones at other people, donâ€™t swear, donâ€™t hate other people, play peacefully with other children. These are some of the values that were inculcated in me as I grew up. So I believe that my very nature as a person (my spiritual make-up, my mental make-up) makes me a Quaker because I naturally share the values that are entrenched in Quakerism.Â  I always strive to do good things, to be at peace with others, to show unconditional love and care to others even though I am not always consistent in what I do, especially spiritually.

Please give an example of how a Meeting for Worship is conducted in your tradition.

Our Meeting is an â€˜Unprogrammed Meetingâ€™ and we worship in silence like Friends in Britain. We usually sit in a circle with spiritual, religious books, leaflets, pamphlets and Quaker Newsletters put on the table in the centre of the circle. The Meetings for Worship are usually held once a month, first Sunday of the month at 10:00 AM for an hour. We meet at Friendsâ€™ houses. After an hour of silence we have what we call â€œAfterwordsâ€ during which people can share things which occurred to their minds or in them during silence but didnâ€™t feel called to say them out at the time. People are free to minister during silence by reading from the Bible or any other relevant books, by singing, by sharing a personal story or experience if they feel led by the Holy Spirit to minister. After the Meetings for Worship we usually have refreshments as a community of Friends, emphasizing the importance of sharing together and connecting with others, not only spiritually but also socially.

I hope these answers respond well to the questions asked. And I thank you for the opportunity to share my Quaker experience with other Friends.

One thought on “Why? How? Tankiso S Phori”