As the 110th anniversary of Â Woodbrooke Quaker Study CentreÂ was marked this week with a special batch of Tottenham cake, Quakers from around the world have praised its role in inspiring generations of Friends to explore their faith.

Woodbrooke was founded in 1903 in the former home of George Cadbury and is based in Selly Oak, Birmingham. â€œThis October we celebrate that Woodbrooke Quaker Study Centre has been a place of learning, of community and of transformation for the last 110 years,â€ said Woodbrookeâ€™s director, Sandra Berry. â€œWhether visitors are here to attend one of own courses, for a conference, or to stay as a bed and breakfast guest, they can all be nurtured by the warm hospitality that Woodbrooke thrives on providing. Visitors can also enjoy the inspiring surroundings of our ten acres of organically managed gardens.â€ 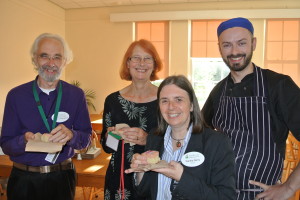 The recording clerk of Quakers in Britain, Paul Parker, said “Woodbrooke and Quakers in Britain are in a symbiotic relationship â€“ neither can thrive without the other.Â  Friends in Britain need the rich spiritual food Woodbrooke offers, the training and support it offers to meetings and Friends undertaking service;Â  its contribution to the life of our yearly meeting is immeasurable.Â  Congratulations on reaching this anniversary.”

Woodbrooke’s impact is regularly felt beyond Britain. “As the only Quaker learning centre in Europe and the Middle East, Woodbrooke has immense importance and impact on the life of Friends well beyondÂ Britain,” explained Marisa Johnson, secretary of the Europe & Middle East Section of Friends World Committee for Consultation. “Its Woodbrooke on the Road programme has taken pastoral support and instruction in Quaker ways to many small and remote communities, for whom such experience is like rain in the desert.

“The availability of funding to bring Friends to Woodbrooke from European countries other than Britain and Ireland through the Catchpool fund has enabled many Friends to experience worship in an established and rich Quaker environment, and peruse the treasures of old Quaker writings and contemporary, evolving Quaker scholarship,” continued Marisa. “The embracing and development of e-learning tools has made it possible for Friends from all continents to come together to share worship, insights and learning. The stewardship of the Swarthmore Lecture and the Eva Koch scholarship, together with the magnificent Equipping for Ministry programme, has made it possible for us to grow as a community of faith â€“ as disciples, a word that has connotations of faithfulness and actually means learners. Woodbrooke makes a reality the fundamental purpose of education â€“ the bringing forth of that which is within, the nurture of the soul and our potential to come to maturity in the Spirit.”

In recent years Woodbrooke has led on developing online courses that can include participants from all around the world.Â â€œIâ€™m very glad that Woodbrooke is walking cheerfully in the online world! Running online courses is a very welcome service,” said Sue, a Quaker from Sweden. “Having signed up for two such courses this year I can only encourage others to do the same. I am a very satisfied Friend!â€

“I love Woodbrooke,” said Jennifer Kavanagh, a London Quaker. “I love going on courses, teaching courses, and just spending a few days pondering. I love the beauty and variety of the grounds, the birds and the lake near which I always sing. The food, the comfort and, maybe, best of all: conversation with others at meals or just in passing. A community of learning and contemplation, rooted in worship.”

Later this month anti-poverty charityÂ Quaker Social Action‘s staff and trustees will spend time at Woodbrooke. “We’ve spent a lot of time recently looking atÂ what it means to be a Quaker organisationÂ in this day and age,” explained Judith Moran, Quaker Social Action’s director. “For many of our staff QSA is the only Quaker organisation that they’ve experienced so spending time at Woodbrooke will enable them to see how another organisation, from a different field, with a strong Quaker ethos works. And Woodbrooke offers great value for money.”

Before Woodbrooke was openedÂ John Wilhelm RowntreeÂ led a campaign within Quakers in Britain for a permanent settlement for religious and social study. George Cadbury, the local chocolate maker and Quaker, was inspired to offer his former home for the purpose. Today, Woodbrooke is Europeâ€™s only Quaker study centre and forms part of their legacy to future generations, based on a vision of Quakersâ€™ actions creating a better world.

Though the building has been modernised and developed since the days the Cadbury family called it home, Woodbrookeâ€™s educational aims havenâ€™t changed since 1903. Woodbrooke offers a wide range of short courses designed around exploring faith and spirituality, as well being a great bed and breakfast option for visitors to Birmingham city centre and nearby Bournville. Woodbrooke is ranked second in Trip Advisor’s B&Bs in Birmingham.

One of Woodbrookeâ€™s staff members, Ben Pink Dandelion, was recently announced as the 2014 Swarthmore lecturer. The lecture, which is held for Quakers in Britain in the care of Woodbrooke Quaker Study Centre, has long been seen as a highlight in the British Quaker calendar. Ben will speak on transformation, looking at how early Quakers transformed the world around them and how Quakers today can be transformed and can transform their meetings and the world around them.