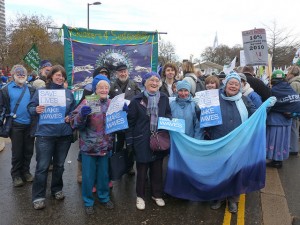 Quakers at the Wave demonstration in London in 2009

Since last yearâ€™s â€œYoung Quaker Climate March Posseâ€ was such a success London Link Group thought it would be a great idea to do it again.

This year â€¦the march is being organised by Campaign Against Climate Change as part of the global day of action, which is at the time as COP16 (2010 United Nations Climate Change Conference in Mexico).