The 1948 Lecture by Edmond Privat, reviewed by John Hall:

The Swarthmore Lecture that wasnâ€™t

The 1948 Yearly Meeting was held for the first time in Scotland: in Edinburgh.Â

The Swarthmore Lecture was to be given by the Swiss Quaker, Edmond Privat (1889-1962) who was an ardent pacifist, human-rights activist, writer and journalist. Â He was a member of the NeuchÃ¢tel Group of Switzerland Yearly Meeting.Â  As a friend of the Nobel laureate Romain Rolland and of Gandhi, he worked for the independence of India and other oppressed countries and, with his wife Yvonne, organised help for refugees.Â  He was also the founding editor of Lâ€™Essor and other leading Socialist newspapers.Â  He is probably most famous now as the great promoter and pioneer of Esperanto. Â He wrote many books.

As it happens, Privat was not able to deliver the Swarthmore Lecture as, in an early session of the Yearly Meeting, a number of Friends objected to its liberal approach.Â  The lecture was given but not as part of the Yearly Meeting programme and it was not published until the following year.Â  It is now out-of-print, but many second-hand copies are available on the Internet in both hard-back and paperback versions.

Early in the lecture, Edmond Privat tells this story: ‘In time of peace, and recently enough, a lecturer addressing an audience in a protestant church, asked those ready to give their life for their country to stand up.Â  Almost everybody rose from their seats.Â  Then he called upon those willing to give their life for their Christian faith.Â  Two old ladies and a hospital nurse rose in their turn.Â  â€œNow,” said the speaker, “you know which your religion is, for your true faith is the one for which we are ready to make the greatest sacrifice.”‘Â  Privat uses this story to argue that national history is far from the truth as it is only one sided; it is the history of solely oneâ€™s own country.Â  Only by sharing our national histories can we get to the Truth.Â  From the problem of being concerned only with history from our own nationâ€™s perspective he goes on to explain how that can lead to war and war is not only beastly, but it corrupts private morals and destroys the ethics of the state and its officials. Â In peacetime, the Church is mostly against war but in wartime just the opposite.Â  From his view of the world just after the close of the second world war, Privat makes a biting criticism of the Church as it subscribed in wartime to patriotic and nationalist views at the expense of universal truths.Â  Further, he attacks the role of the media.Â  As he says,

everyone knows that public opinion is mainly manufactured by the press. â€¦ During all war it is a rule to heap responsibility on the back of the other party.Â  Further more, all kinds of tales of atrocities must be added to the load, some true, some not. … Brutal desires of the most primitive kind, like rape, burst out first on imagining the enemy’s behaviour.Â  Exaggeration follows and leads the way to imitation.Â  That is how reprisals begin. â€¦ He who believes in an inner spiritual light cannot possibly … keep loyalty to nation above all others.Â  If he believes the essence of ethics to be rooted or lighted in the human soul, he cannot accept a national worship leading to hatred of other men.Â  The clash of loyalties, so tragic among nations, is still more so between religions.Â  That is why we should always control our own ideas and be ready to criticize our own ways of thought.Â

Thus, while Indian pacifists under Gandhi were ignored, Polish pacifists under the poet Zygmunt Krasinski were praised in western cathedrals for their â€˜Christian faithâ€™.Â  As he says, ‘Painting and wishing other religions as black as possible in order to make one’s own shine more is poor faith and no loyalty to Christ’s way.’Â  Privat proposes that Truth can come from many sources, not necessarily Christian.Â  So he praises the theology of Gandhi and links him to Paul Ceresole, who later became a Quaker.

The front page of the Clash of Loyalties

Privat then turns his eye to Quakerism.Â  He writes glowingly of the London Yearly Meeting’s response (LYM Epistle 28 May 1930) to revolutionary Russia’s attacks on religion.Â  He describes how George Fox’s ‘early disciples went as far as pasting up posters on the doors of churches advising people not to try to find God there, but to go home and make the discovery deep inside.’Â  At the same time,

wise Friends faithfully read the Gospel to keep constantly under sight the life, the message and the sacrifice that serve them as criterion and standard to measure things.Â  Christ’s example is their compass.Â  If their inner light leads them the same way, they know they walk the right path.

Privat is complimentary too about William Penn and the mutual relations with the â€˜Red Indiansâ€™, and the British governmentâ€™s with India, which led to independence, and self-government.Â  As he says,

if you must be two for a quarrel, you must also be two for a reconciliation.Â  There is no reason why the Society of Friends should ever be ashamed of doing too much relief work as if it were not the best way of spreading thought and indeed a far more efficient language than argument.Â  This is not just material relief but also â€˜the friendly hand on the shoulder.â€™

In a change of tack, he says that ‘Science is only the cold part of truth, love is the warm side, but they should not stand apart, otherwise you get science making atomic bombs and love stopping at boundaries.Â  Truth is one.’Â  He then quotes a number of different sources of that Truth, such as a speech by Adam Czartoryski to the Polish Historical Society in 1861 when he said that ‘More heroism is needed to court death in uncovering one’s breast than in defending one’s life with the sword.’Â  Likewise, French scholar, Victor BÃ©rard who wrote that we should ‘keep our cultural influence clean of political lordship!Â  If you don’t, you will lose both’; perhaps an argument for the recent separation of the BBC World Service from the Foreign Office.

Privat concluded his lecture with an attack on the traditional and sentimental view of God.Â  The inner light opens us to the sense of the universal and eternal.Â  â€˜The future belongs to a religion of the spirit, showing a better way to that all-embracing sense of oneness which Jesus expressed as Godâ€™s point of view.â€™

In a Yearly Meeting session, a number of Friends described by Howard Brinton, a visiting American Friend, as â€˜fundamentalistâ€™, objected to the lecture, which they claimed was â€˜too liberalâ€™.Â  The lecture was cancelled with no explanation given.

Brinton, considered Edmond Privatâ€™s liberal theology to be about as liberal as that of George Fox and Robert Barclay.Â  As a result, he spoke out during the Yearly Meeting session where he pointed out that â€˜both kinds of theology were important to Quakerism, the fundamentalist philosophy of the Puritans who persecuted the early Quakers, and the liberal theology of Fox and Barclay.â€™ Â This remark was not well received by â€˜fundamentalistâ€™ Friends a dozen of whom immediately rose up to defend their position. Â Two weighty British Friends, T. Edmund Harvey and Henry T. Gillet criticized this behavior as un-Quakerly. Â According to Brinton, they â€˜scolded the Yearly Meeting for not remaining quiet after an important message.â€™

The issue was what these days we would call one between Universalist and Christian-based Friends.

Privat was allowed to give a talk, entitled The Clash of Loyalties, subsequently published as a book under this title, during the time of Yearly Meeting, but not as the Swarthmore Lecture, the only time it was ever cancelled.

The ultimate dystopian British novel 1984 was written in 1948.Â  It was also the year of the Arab-Israeli war.Â  Was London Yearly Meeting then part of a Christian Zeitgeist?Â  Has that now moved on?Â  Perhaps, Edmond Privat was ahead of his time.Â  I like to think that fifty-four years later, explaining the liberal approach to Quaker theology would not lead to a cancellation of the lecture.Â  Indeed, I hope that the Society of Friends would see the lecture as properly interpreting to its members their message and mission; and to bringing before the public one important strand of the spirit, aims and fundamental principles of Friends, just as the Swarthmore Lecture Committee intends.Â  I should also like to hope that Yearly Meeting would not again exert its power in such a way, and would not now think it right to censor an admirable message such as Edmond Privatâ€™s. 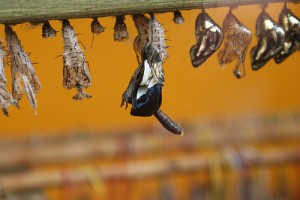 A butterfly entering into the world. Photo: Michelle Bartsch/flickr CC