Steps in a large room 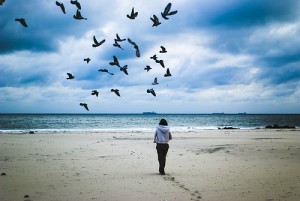 The 1985 Swarthmore Lecture by Christopher Holdsworth. Reviewed by Valerie Graves.

It is about the Benedictine Rule. What have monks in common with Friends? Penn says a monastery can be within us.

Background. Christopher Holdsworth was born into a Christian home: his mother was Anglican and his father a Quaker. They were not saints but lived a Christian life, kneeled to pray at night and read from the Bible every day, followed by quiet waiting. Even if you do not go along with this, it has an impact.

He went to church and to Meeting, so knew Quakerism was not the only way, but eventually chose it; was at Bootham school, attended Clifford Street Meeting, and experienced Anglican and Methodist worship. Then Cambridge, time at Woodbrooke, and an academic and research career.

Why the title? Christopher Holdsworth jokes that he is a large untidy person who needs a lot of space. He loved the idea of Alice going through the mirror into a different space.

Patterns and Rules. We know little of Benedict’s life. Italian, lived 480-547, but his Rule and Counsels are on of the most influential documents ever written. He tried to create a â€œschool of the lord’s serviceâ€. Strict discipline was a part. This may not attract us, but our own Christian Discipline expects a newcomer to be â€œa humble learner in the School of Christâ€. The advice from the Balby elders â€“ â€œthe letter killethâ€ and so on, tells us not to adhere to rules and forms; nevertheless we must adopt a discipline if we are learning to play the clarinet, say, or any kind of sport. A rule may bring more abundant life, and stability comes from discipline. As clerk or elder, say, we must learn how to use silence, when to speak and when to wait quietly.

New monks have to promise stability, conversion of life, and obedience (compared with solitary, wandering orders). But there should be kindness in the discipline: the abbot would be prudent and considerate, valuing humility. Attendance at all services was essential. For us, as for them, this meant studying to be on good terms with one another â€“ not always easy. Christopher Holdsworth spends a lot of time on this â€“ not just academically as he often visited monasteries.

An essential part of their worship was â€œlectio divinaâ€, sacred reading. Taken very slowly, reading the Bible from cover to cover, it was to be savoured and considered.

Moving through the Psalms. They were read in order, over and over again in the course of years. Christopher Holdsworth thought (as we all do) that many were unacceptable, full of anger and aggressiveness, but he came to see that all had their place.

The Early Fathers. Christopher Holdsworth ends with a chapter on the teachings of the early fathers (mothers too). They were holy people who spent time in the nearby desert. Not much studied now, but he brings them to life.

I have only given you a taste of this little book, but it has much to tell us about the value of regular, if not daily, study of how to bring order into our thinking. â€œDisciplineâ€ has a bad name because of its association with punishment, but knowing how to do things properly brings peace and joy.