The Journal as Worship 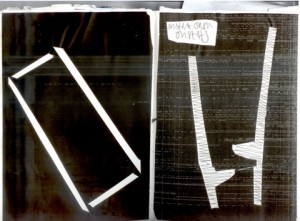 I owe a lot to a book called The Journal as Art, by Jennifer New, a book that reproduces pages from visual journals, alongside the creator’s comments on why and how they journal. When I was a teenager, bored of my written diaries that felt petty and uninspiring, this book seemed to show a way to open up my diaries beyond what I could express in words. My writing always seemed to lead to cynicism and complaint, but I found when drawing I could start to express joy, surprise and excitement and create a journal that felt genuinely renewing.

Journalling to me is about intuitively matching form and idea â€“ when it works an unexpected image can join perfectly with an idea that’s been hanging around, not spelled out. I journal visually, through collage and drawing, with a few words usually written illegibly around the edges. I find that using images rather than words helps me avoid predictable ideas and surprise myself.

At a small meeting in York a couple of years ago, people were sitting in four corners of the room and I saw an oblong rising up to join them together. I journalled that image, and the oblong came to seem a spiritual shape. I think this demonstrates the intuitive connectionÂ  between images and meaning that joins journalling and prayer together. I think visually, so I often explain the world to myself in images anyway. If images can come to me in a meeting, and get journalled later then they become part of my visual vocabulary, and suggest ideas that I wouldn’t have reached through words. 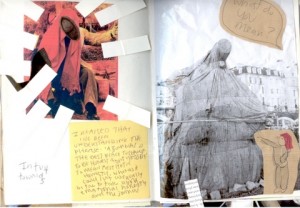 I think both journalling and worship can produce experiences that can only be described as themselves. The description of my spiritual oblong sounds strange, but made perfect sense in the journal; similarly, the feeling of being in a profound silent meeting can’t be best explained in words. I was talking to a friend who isn’t a quaker about worship, and she suggested that spoken worship is about trying to express silence in words; I think my spiritual journalling is about trying to express silence in pictures.Â

In The Journal as Art, art professor and illustrator John Clapp describes a journal as ‘the friendliest place an artist can practice being honest’ with themselves. I think about honesty a lot when it comes to journalling. I try to make pages that are aesthetically true, where the process of bringing different images together has been genuine, and the result has its own integrity. I look back at old journals and know which images have been made with some thought and discernment behind them, and which are just decoration. Having a journal that says something honest about myself is important too, but I’ve come to accept that I’m not a confessional person, and my journals can be deeply personal without being explicit.

My journals are very personal, and I’m critical with them. If I spend lots of time journalling, it (sometimes) feels easier to look at other parts of my life and ask whether I’m being honest with myself. I find that there’s a sinking down feeling in starting a new journal, similar to that in a meeting for worship. Sometimes I dread starting a new journal, because I have to make friends with it, and make it trust me. Sometimes I have trouble staying friends with it once I’ve started because it demands a lot of effort, and it’s painful to admit that a page isn’t working and start again. I hate my journal when it’s not going well, and love it when it is. 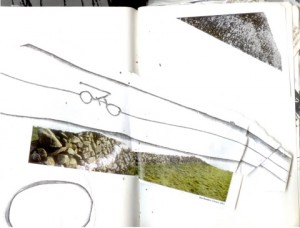 The journal provides solid evidence of insubstantial notions, thoughts, inspirations, doubts, jokes, connections, bundled together into something weighty and substantial and made of paper. I enjoy blogging, but it fulfils a different purpose â€“ journalling results in the creation of an object, something solid made from transience. I find it worthwhile to look back on old journals while working on a new one, because sometimes there are unexpected connections and threads of thought running through. Returning to The Journal as Art, I think another contributor, Gary Brown brilliantly describes all that a journal can be when he talks about his own as ‘my secret friend, enemy, counselor, definitely my map and at times a thief… morally straight, it doesn’t lie. It sharpens you, your dreams, and your eyes stay wide as a child’s.’

2 thoughts on “The Journal as worship”