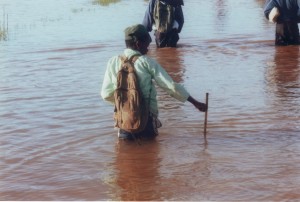 Children crossing flooded plains on their way to school. Photo: Money for Madagascar

â€œLast year, three children drowned while trying to get to school from Ambohidava, can you imagine that?â€ Theresa Haine, a Welsh Quaker who is dedicated to helping people in Madagascar to improve their lives, is explaining why her charity has just been helping to build a new secondary school in Ambohidava, Madagascar. For the past 27 years Theresa has been involved with Money for Madagascar, a Welsh charity that raises money for projects in the island state in the Indian Ocean, off the south-east coast of Africa.

Theresa’s work is news because earlier this year the Madagascar government awarded Theresa the Chevalier de lâ€™Orde National Malagasy (knight of the national order of Madagascar) for her services to Madagascar. But Theresa has certainty about what the award is really about. â€œIt was presented to me strictly on behalf of Money for Madagascar,â€ she says.

Money for Madagascar has its origins in traditional Quaker processes. In the mid-1980s Barbara Prys-Williams, another Quaker, learned in the news about the daily struggle that the Malagasy people were suffering. She wrote to all of the major aid charities and asked what they were doing about the country. Only one wrote back, Save the Children, and told her that they were aware of the situation there but they were fully stretched dealing with situations in other countries.

Barbara developed a concern for Madagascar and took it to her local meeting to help her test it. The outcome was that her meeting, Swansea in south Wales, took it upon themselves to form a charity to make a positive difference in the situation. Money for Madagascar was born and 27 years later, they’re still making a difference.

The story goes that Barbara made up some innovative initiatives to fundraise for Money for Madagascar. A fondly remembered idea was to charge a ‘daffodil tax’ on saint David’s Day, so that people paid a small charge to wear a flower and to make a connection to the Malagasy people.

Although founded by Quakers and recognised as a Listed Informal Group by Quakers in Britain, Money for Madagascar set out to make sure that they had as broad a support base as possible. As well as hearty and longstanding commitment from Quaker donors, the charity benefits from support from all kinds of people and today six of the 11 trustees are not Quaker.

According to Water Aid almost 80% of schools in Madagascar don’t have a water point and 40% don’t have a toilet. The World Bank says that 92% of the population survives on less than $2 per day.

Money for Madagascar’s distributes over Â£250,000 a year on projects but there’s a lot of work to support. They work in over 70 villages in Madagascar, funding food security, reforestation and environmental education projects. 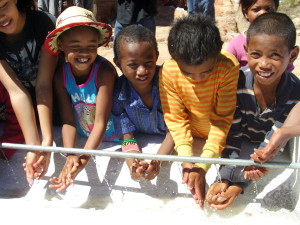 Children test out the new water supply at their school. Photo: Money for Madagascar

Money for Madagascar supports over 1,000 street children each year to receive food, education and medical care and funds accommodation for 140 children. Almost 100 classrooms have been funded by the charity. They also fund specialist education for scores of disabled children.The charity also supports vulnerable and impoverished women including domestic violence victims and helps groups of women to form income-generating cooperatives.

But back to the children of Ambohidava. It is one of five villages located on the side of a flood plain in a remote part of the central highlands of Madagascar. Although there’s a primary school in the village, the nearest secondary school is six miles away on the other side of the valley. Because of the annual floods children lose three month of school each year unless they brave the treacherous conditions. Sadly last year three children lost their lives simply trying to get to school. 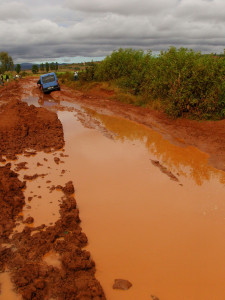 The road to Ambohidava. Photo: Money for Madagascar

Consequently, Money for Madagascar funded the construction of three classrooms for a new secondary school in Ambohidava. All Money for Madagascar approved projects are planned and initiated by Malagasy people and projects are managed to completion by local people. Despite the almost impassable conditions, the local contractors were able to safely bring in all of the materials and build the classrooms.

Then, thanks to a sponsored wade across Morecambe bay, Â£13,000 was raised for Money for Madagascar last month, enabling the release of funds to complete the secondary school in Ambohidava, as well as provide educational supplies to the Akany Avoko children’s home and La Source special needs school as well enabling the launch of a new project to help women and children in Toamasina prison.

Money for Madagascar arranges a visit from a trustee to the island each year to visit projects and to verify the success of the venture and assess its genuine impact on the beneficiaries.

Theresa has been involved with Money for Madagascar since the beginning and says that the support from the charity is also about building friendship. When the award was given to her earlier this year in Madagascar, it was at a special ceremony in one of the villages where Money for Madagascar supports projects, so that everyone in the village could join in with a party afterwards. By coincidence the Welsh and Madagascan flags share the same colours â€“ red, green and white. Theresa said that after she was given her award, â€œas the sun shone on the green, white and red of the Welsh and Malagasy flags we gave thanks for the friendship between our people â€“ for those who have gone before us, and those whose lives still depend on us.”