Quakers in Britain are urging governments to reject violence and find a peaceful solution to the crisis in Syria by adopting nonviolent tools for conflict resolution.

Helen Drewery, general secretary of Quaker Peace & Social Witness, said today that â€œQuakers see war as wrong because we value every human being so highly that killing them cannot be right.Â We need to use the nonviolent tools we have â€“ we need to respect them, learn to use them better and not see them as weak alternatives.Â  As the threat of military intervention is averted, at least for now, itâ€™s important that we all redouble our efforts to find peaceful resolutions to this situation, support humanitarian aid to the region, and encourage dialogue.â€

A public letter published by the American organisation Friends Committee on National Legislation calls on the US government to take 6 nonviolent steps for peace. The steps could be adopted by the UK government and others who continue to cite the need for â€œrobust actionâ€ following the alleged use of chemical weapons in the country. British Quakers could respond to the situation by writing to their representatives encouraging nonviolent steps as part of what David Cameron calls â€œrobust actionâ€.

The 6 steps put forward by FCNL are:

In the letter, which can be read in full on the FCNL website, FCNL executive secretary Diane Randall says: â€œThe solution to the Syrian crises will not be found in escalated violence, but rather in means and mechanisms that de-escalate the violence and create a platform for a negotiated settlement. Working with all stakeholders, to apply new non-military mechanisms to weaken the engaged partiesâ€™ capacities and motivations to commit atrocities against civilians is the only way to make that happen. Just as the Taif Agreement of 1989 ushered in an end to the Lebanese civil war by securing buy-in from internal factions and external actors, a negotiated end to the Syrian crisis must be similarly inclusive.

Diane Randall concludes: â€œAs a Quaker organization, we do not believe violence is the solution. Further violence will not achieve the goals that you have articulated in Syria, and we do not see any scenarios where U.S. military intervention will help.â€

On Thursday 29/08/2013 the UK parliament voted by 285 votes to 272 not to support a premature attack on Syria. Speaking on Friday 30/08/2013, recording clerk of Quakers in Britain Paul Parker said: â€œWe acknowledge the difficulty of deciding on an appropriate response to the atrocious situation in Syria at the present time, and have been upholding decision-makers as they struggle to find a right way forward.Â  We are pleased to see this moderate and peaceful outcome, and thank MPs for their care in making this difficult choice.â€

The European Union has had an arms embargo in place on Syria but in 05/2013 this was fundamentally weakened by the UK. Campaign Against Arms Trade has been calling on the UK government to take six steps towards peace:

Quakers in Britain concluded a public statement they issued on Wednesday stating their opposition to violence by saying: â€œWe beg those in power to work with diligence through the United Nations and all diplomatic channels to bring peace nearer. We challenge them to use their resources and imaginations creatively. Please don’t fall into the old trap of thinking that taking any action is bound to be better than doing nothing.

â€œWe will pray for peace in the region, and continue to voice our deep opposition to war.â€ 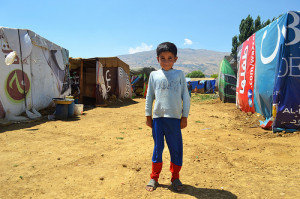 A child in a refugee camp in Lebanon, near the Syrian border. Photo: CAFOD/CC