Set up after a peace conference of Quakers in the North in 01/1913, the Northern Friends Peace Board (NFPB) has undertaken a variety of work with and for Northern Friends, supported by funding and representatives from throughout the North of Britain. When, a couple of years ago, NFPB members began to think about the centenary of NFPB they were clearly excited by the opportunity it seemed to present for celebrating the work that has been done and raising our profile. Since then, a small group has met every few months to sift through the ideas and put together a coherent programme of activities and resources. 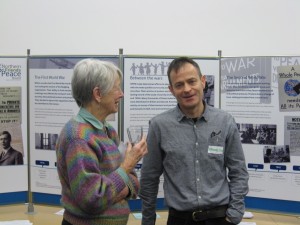 Jo, a NFPB member from West Cumbria Quakers with Howard, from the family of the first NFPB secretary. Photo: NFPB.

There is still a little way to go before all of these come to fruition, but we were pleased to be able to put on a celebratory afternoon earlier this month.Â  The event took at the newly refurbished Manchester Meeting House and brought together past and present NFPB members and workers, supporters and interested enquirers. The first secretary of NFPB, Robert Long (serving from 1913 to 1942) was represented by three of his grandchildren. For me, having worked as co-ordinator for 22 years it was something akin to a family reunion.

Friends speaking at the gathering in Manchester talked about the early challenges of the first world war and of supporting conscientious objectors through to the cold war and more recent conflict. The 70 Friends present also heard how the boardâ€™s work had encompassed broader aspects of peace, recognising the roots of conflict in injustice, for example.Â  A pack of materials relating to the centenary is being prepared for Meetings, which will include a booklet launched on the day of our celebration. An accompanying exhibition was also on show and will be available in a variety of formats for Friends to use.

NFPB members present at the gathering spoke of their appreciation for all the service that Friends have given to the board over the years, of getting a better sense of the significance of its work and an eagerness to engage with Friends in discerning priorities for future work and witness.

Information about activities and resources relating to the centenary is being regularly updated on NFPBâ€™s website at http://nfpb.org.uk/projects/centenary.

A key time for me in preparing for this year was the day I and a colleague spent in Leeds, going through our archives and reading and making notes from past annual reports.Â  Whilst some of the text is inevitably prosaic and descriptive, there are more personal/spiritual reflections throughout.Â  Cumulatively, the work is inspiring and impressive in its scope.Â  Some of the more reflective text is profoundly moving, giving a good feel for the passions, challenges, insights and vision that has driven Friendsâ€™ collective and individual commitment to this particular piece of peace work.

The following is just part of a leaflet written by Robert J Long on the outbreak of war, 6 August 1914.

What shall we do?

Our efforts to prevent war have been in vain.Â  The great mass meetings held up to the eleventh hour have failed to change the policy of the Government, entangled as it has been by secret understandings and conversations.

Now is not the time to apportion the blame. One thing however, stands out clearly – this is not a people’s war.Â  It has its origins in the military bureaucracies of the Powers, in the mutual suspicions of diplomatists, in the cynical self aggrandisement of the war lords. The Russian peasant and the German artisan are pawns in the deadly game of their governors. The English business man and labourer alike are suffering because of movements in high quarters upon which they have never been consulted.Â  What-then must be our policy at the present moment ?

We are driven back to fundamentals.Â  The awfulness and sin of war will soon be brought home to every thinking man in the country.Â  There is an absence of the Mafficking of fifteen years ago.Â  In our Northern cities people are gathering sadly and with comparatively but little sign of war fever to discuss the situation.

May it never be said that our peace principles are an excuse for shirking duty. England needs her Quaker sons and daughters at the present hour.Â Â  Men and women are wanted who will serve in the humdrum services of life no less bravely than the soldiers on the battlefield.

The great war is a great crime – a crime against God and humanity – a crime against our slowly won civilisation.Â Â  Cannot we step in at the present time and do our share in conserving that civilisation which is threatened with destruction.Â Â  The war we trust will be short, but if prolonged how great is the danger – the unemployed crowd, hunger and desperation, panic and destruction, crime and misery.Â  We must do our share by organisation and personal effort in preventing such a set back to barbarism.Â Â  If the worst comes we shall be needed to spend days and nights in works of. help and relief. And there may yet be need for a Quaker corps to carry the message of love and goodwill, to convey hope and material sustenance to the war ravaged districts of Europe, that “England’s love” may win back the affections of those whose fields have been trodden under the heel of our armies or whose homes have been shattered by the guns of our fleet.

Meanwhile the weeks that are before us are dark and pregnant with evil foreboding the voice of peace may not be heard in the clash of arms.Â  We may yet be called, however unjustly, pro-Germans and supporters of every country except our own.Â Â  For the moment, ours is the cause which has gone under, and surely this is the time to test the reality of our faith.

Who’ll wear the beaten colours till our time comes again.

When sullen crowds are densest and fickle as the sea.

Who’ll wear the beaten colours, and wear them home with me.

Now is the time to stand to our principles.Â  We must at the present moment show that there are men in the country with a burning, living faith who will have no part or lot in the war system because it is a denial of the Christian faith.