What really appeals to me about the process of becoming a Quaker â€“ convincement â€“ is that it is usually a gradual process rather than the once-for-all ‘lightbulb moment’ of conversion.

Descriptions of the way in which early Friends came to Quakerism identify several stages. First of all the individual is ‘reached’ by the message of Quakerism or by the behaviour and example ofÂ particular Quakers. Next comes the first part of convincement in which she or he is, to use an equivalent term, convicted â€“ in the sense of a criminal conviction â€“ that there is a darkness within, a failing that must be changed before convincement can proceed. This failing is different for everyone. Examples given in Friends’ spiritual autobiographies include dancing, reading novels, drinking, putting too great an emphasis on one’s own status and ‘lightness’ or insufficient seriousness. I think that my own failing, from which many others sprang, was a refusal to allow for the possibility of change.

Once a change in behaviour or attitude has been begun then convincement can proceed to the stage where the individual is willing to identify with Quakers and Quakerism and be seen as part of the group both by Friends and by the world in general. This involves taking the Quaker testimonies to peace, equality, simplicity and truth into one’s life. In the past it also entailed changes in dress and speech that acted as clear signs of Quaker membership. Now that plain speech and plain dress are much rarer we need to think more about how, when or even if we identify ourselves to others as Quakers. Should we wear badges? Should we speak or write more consciously? This is a question I am still struggling with.

In the past and sometimes even today a distinction has been made between ‘birthright’ Friends who have been born into Quaker families and ‘convinced’ Friends who have come to Quakers from outside, with convinced Friends often seen as somehow inferior. This is a false dichotomy as Friends have always recognised that even those brought up in Quaker families are still in need of convincement. Samuel Bownas was a case in point, carefully brought up to behave, dress and speak like a Quaker but unable to understand the heart of his faith until he too was convinced.

I am glad that convincement and becoming a Quaker is a continuing process. I am always heartened by the idea of ‘measure’ â€“ that Light is given to each according to their capacity, or measure, and that if we live up to what is given then it is possible for that measure to increase.

This post is reproduced from Gil’s blog Stumbling blocks to stepping stones and is part of a Quaker alphabet blog series started by Rhiannon Grant. You can read more Quaker alphabet posts on Rhiannon’s blog, Brigid, Fox and Buddha and on Stephanie’s blog. 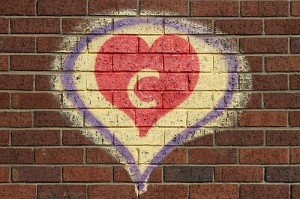