I am one of your supporters, a dual national living in Sweden. As an 11th generation Quaker, I feel connected to you because your daughters attend a Quaker school â€“ I am also a product of Quaker education! I feel more deeply connected because I believe that your most profound hopes for society mirror those that Quakers have upheld for over 350 years â€“ nonviolent methods of conflict resolution, equality, restorative rather than retributive justice.

I was totally consumed by the election, but my relief was soon replaced by overwhelming despair and powerlessness in the light of unfolding events. Human and environmental suffering is acute in many places, but in focus is the conflict inIsraelandPalestine. I visited there in 2009 for Quaker work, just days after your talk inCairo. Our study tour visited both settlement and refugee camp, and hope was palpable. Three years have passed since then. Now, I am thankful for the present ceasefire and dare to hope that it will be a step toward a lasting and just peace. I echo Jean Zaru, Palestinian Quaker and relentless advocate for peace: I am not pro-Israel or pro-Palestine. I am pro-justice. My own experience has informed my understanding of what justice means in this context. I cannot ignore what I saw of 2009 and learned of 1948.

Despair and powerlessness paralyze me in the face of violence both overt and structural. I try to imagine being in a position of power and similarly overwhelmed. I try to imagine having profound hopes for the way God’s world should and could be â€“ swords melted into ploughshares and hardened hearts melted into compassion â€“ but being limited by road blocks of partisanship, special interests, economic agreements and ignorance.

In all simplicity, I offer you my encouragement and prayer: that you maintain your vision and hope in the midst of inhumane situations and structures, that you are able in the next four years to realize more of your vision, that you will stand boldly for truth, and that you are able to discern solutions that no one has yet seen.

P.s. I was the only white child in my elementary school classes in Ray School in southside Chicago during the time my father did his doctoral studies in anthropology. My mother has mused that she may have crossed paths with Michelle’s mother at the Hyde Park Co-op in the early 60s. It’s a small world. 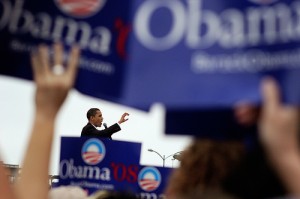