The Occupy London movement is standing together with similar occupations around the world and is a peaceful non-hierarchical forum. According to their website, Occupy London participants are â€˜in agreement that the current system is undemocratic and unjust. We need alternatives; you are invited to join us in debate and developing them; to create a better future for everyone.

The Meeting for Worship took place against a backdrop of bell-ringing from both the cathedral and a nearby church. However, Friends present spoke of a strong gathered presence and the symbolism that Friends were worshipping outside on the steps rather than inside the cathedral.

A statement of Christian solidarity with the Occupy London movement has been signed by several groups including Ekklesia, Fellowship of Reconciliation (Europe), London Catholic Workers, Society of Sacramental Socialists, Speak network and Third Way. Stevenage Quaker Meeting has signed up to the statement. The statement reads:

As Christians, we stand alongside people of all religions and none who are resisting economic injustice with active nonviolence. We offer our greetings to people engaged in occupations of financial centres throughout the world.

We seek to witness to the love and justice of God, proclaimed by Jesus Christ. Jesus said that he had come to â€œset free the oppressedâ€. His gospel is good news for all people. It is a challenge to all structures, systems, practices and attitudes that lead people to exploit and oppress their fellow human beings.

The global economic system divides people one from another and separates humanity from creation. It perpetuates the wealth of the few at the expense of the many. It fuels violence and environmental destruction. It is based on idolatrous subservience to markets. We cannot worship both God and money.

We are inspired by Jesus, who protested against exploitative traders and moneychangers in the Jerusalem Temple. Christianity began as a grassroots protest movement. Nonviolent direct action can play an important and ethical role in resisting injustice and achieving change.

We stand in solidarity with the â€˜Occupy Londonâ€™ movement and regret that they have not been able to make their protest closer to the London Stock Exchange. We applaud their commitment to co-operating with St Paulâ€™s Cathedral and to ensuring that their camp is safe for everyone in the vicinity. We were pleased by the cathedralâ€™s initial welcome to the camp and hope that difficulties between the occupiers and the cathedral can be speedily resolved, keeping the focus on the need to challenge the financial injustices perpetuated by the City of London.’

â€œIf there is a multifaith or non-religious statement of support, I hope that all the Christian groups who sign this statement would be happy to sign it. Iâ€™d be delighted if Muslim, Jewish, Pagan, Humanist, Atheist or other groups produce their own statements of support. There is a media narrative suggesting that the protest camp is opposed to St Paulâ€™s, or to churches, or to Christianity, and itâ€™s good to challenge that. But, more than that, itâ€™s good to urge Christian groups to back the protest, alongside those of other religions and of none.â€ 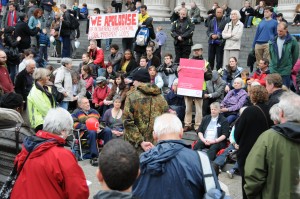 2 thoughts on “A Quaker presence at Occupy London”