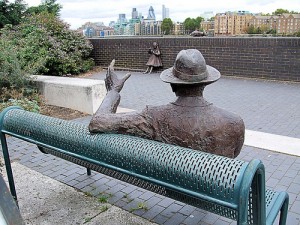 A campaignÂ is set to beÂ launched by Southwark residents to replace the Alfred Salter statue that was stolen last yearÂ from Bermondsey.

Alfred Salter was a Quaker and GP who lived and worked in Bermondsey for many years and also served as an MP for them. Alfred’s wife Ada was responsible for many of the streets in the area having trees planted in them, as an example of her concern for local residents and their living environment.

Although it was only a statue of Alfred that was stolen, the residents will launch a campaign later this month with which they hope to raise enough funds for a replacement that includes Ada too, so they are seeking to raise Â£40,000. Southwark Council has agreed to match the funding pound for pound. The statue is believed to have been stolen for scrap metal.

In the past few weeks the dedicated residents, who formed a committee, have been spent fact-finding, contacting the original artist and negotiating with the council.

The committee recently took a surviving resident of Alfred’s around Bermondsey and showed her the Salter memorials and plaques.

In January home secretary Theresa May announced the introduction of urgent legislation to combat the epidemic of metal theft in the UK. Measures, including the banning of cash payments for scrap metal, would be tabled as amendments to the Legal Aid, Sentencing and Punishment of Offenders Bill, currently in the House of Lords. These new laws are intended to improve the traceability of scrap metal transactions and reduce the ability of anonymous sellers to handle stolen metal.

Bermondsey Liberal Democrat MP Simon Hughes has taken a close interest in the metals legislation since he was notified of the theft of the Alfred Salter statue and he has been supportive of the campaign to fund a replacement.

Meanwhile, Trish Melluish isÂ doing some early research about Alfred Salter for a friend who is devising a theatrical piece which will be performed in London.Â Â She wouldÂ love to hear annecdotesÂ from patients (or families of patients as most ofÂ Alfred Salter’s patients will have died by now) or others who remember him. You can contact Trish by posting at the end of this article indicating ‘not for publication’ with your contact details and a message to be passed onto Trish.

If you wish to make a pledge to support the Alfred & Ada Salter statue fund, post a message at the end of this article stating ‘not for pubication’ and your contact details and Nayler will pass your details onto the collectors.

A Facebook page celebrating Alfred Salter has been set up and can be liked here: https://www.facebook.com/pages/Dr-Alfred-Salter/172662216090405.