Five Christians, who were forcibly removed from the steps of saint Paulâ€™s cathedral in London as they prayed during the eviction of the Occupy London camp, have today delivered a letter to the canon pastor of the cathedral, Michael Colclough. In the letter they ask the cathedral authorities to clarify whether they gave the police permission for the forced removal, which saw police dragging praying Christians from their knees. The court order authorised eviction of land belonging to the City of London Corporation, but did not cover cathedral property. The cathedral authorities have made no public statement on this point since the eviction on 28 February. 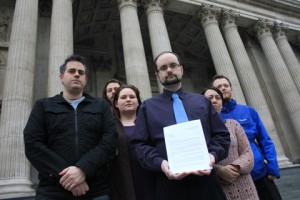 Twenty clergy, including eleven Anglicans, have counter-signed the letter in support.

The five Christians five â€“ George Barda, Jonathan Bartley, Siobhan Grimes, Symon Hill and Sam Walton â€“ have asked for a meeting with senior representatives of the cathedral. Their letter offers to meet â€œin a spirit of love and respectâ€.

â€œWe were profoundly shocked to be forcibly removed from the steps of a church while we prayed… After praying in the middle of the camp area, we decided to pray on the steps, not least because many of the occupiers were sitting there, some of them in a state of considerable distress.â€

Keith Hebden, a Church of England priest in Gloucestershire, was one of the clergy who counter-signed the letter in support. He said: “Now that those involved, including people of faith, have been violently removed from the steps of St Paul’s Cathedral, I ask them to make clear, not only what part they played in complicity to the violence, but also what they intend to do in the face of real and pressing issues of injustice.”

The five were photographed by the media at the time and appeared in national newspapers. Sam Walton, a north London Quaker, told Nayler that he was reciting the Lordâ€™s Prayer as he was removed from the steps by police.