Back page interview, from the Church Times

I went straight into working as an actor in Glasgow after leaving university, and then became a theatre director at the Everyman, Liverpool.

Through a series of accidents, I found that I was better at facing the audience than I was at acting, so I became a professional musician for 38 years. Iâ€™m bad at dates, but I think itâ€™s about 38 years…

I donâ€™t know how many television shows I did, and one-man shows all over the country, and all over the world.

Iâ€™m more or less retired now, but I work as a magical consultant in the West End.

I was doing a show with various famous people like Julie Walters and Anthony Sher, or Tony, as I knew him then, and I think it was Tony who suggested that I should be the person who did the magic tricks. So I sent home to my parents for a book Iâ€™d been given for Christmas when I was ten and had been interested in magic for about six months. It was probably too grown-up for me then, but it absolutely hit the spot when I was 23 or 24, so I switched â€“ virtually overnight.

â€œTalentâ€ is too strong a word, but I realised I had green fingers for it, and found myself much more at ease, conversing with the audience.

My act was â€œThe Great Soprendoâ€, which was a sort of Spanish pastiche â€“ made easier for me, I suppose because I had a degree in it (Spanish, I mean â€“ not magic). Then I switched to performing under my own name, face, personality. I concentrate on business speaking now, and consultancy, and my life has taken a different turn, mainly because of the Quakers.

I was going through quite a difficult patch in my mid-40s, and rediscovered a religious dimension which hadnâ€™t been there since I left school or even before â€“ so I needed a place to be.

Then I found myself staring at this Quaker poster in a traffic jam every day for three weeks: â€œPeace is a process to be engaged in, not a state to be reachedâ€. It started to bore into my head, but I was very, very disinclined to talk to anyone who would want to convert me. I didnâ€™t know then that that was the last thing any Quaker would do. Quakers donâ€™t preach, they donâ€™t have all the answers.

I sat with the Quakers for a good few months, and found it an absolute revelation â€“ just wonderful. Quakers accept people just as they are, and were wonderfully welcoming, even though my career was in the performing arts. If you assume Quakerism is a bleak, forbidding way of life, youâ€™re making a big mistake â€“ theyâ€™re a fun-loving bunch who understand what I do.

I decided to make some changes in the way I was performing as a result of my time with them. I ensured that everything I did was play: Iâ€™m playing at being a magician, and youâ€™re playing at being the audience. If anyone starts to believe that any of this is real, weâ€™re in deep trouble.

Quakerism is about a direct encounter with the divine. Iâ€™m very musical and listen to a lot of church music, but I find the wonderful Quaker Meeting discipline offers a wonderful unmediated encounter quite unlike anything else I experienced elsewhere.

Thereâ€™s a joke: â€œHow do Quakers sing hymns?â€ Answer: â€œVery slowly, because theyâ€™re always reading the next line to see if they agree with it.â€ If I never have to sing the line, â€œLo, he abhors not the virginâ€™s wombâ€ again, it wonâ€™t be too soon â€“ I find such sententious twaddle very difficult to take. Religious music has a huge place in my life, but not in my religious observance.

My daughter is studying for a year in Verona for her Cambridge language degree, and while sheâ€™s there, sheâ€™s also studying singing at the Verona Conservatoire. My son is 18 and has just started at Leeds College of Music. Heâ€™s very into jazz, as I am, and love my daughterâ€™s music too. Iâ€™m terribly lucky.

Quaker Quest started in 2002 with 12 of us preparing it. It has a superficial resemblance to the Alpha course, but we have no desire to convert anyone. As an outreach initiative, itâ€™s about standing up, saying clearly who we are, and sitting down again. People who come can decide if they want to come again. We deliberately have three speakers at each evening, chosen because they donâ€™t agree with one another on, for example, Jesus, or worship, or God, or peace. Itâ€™s a series of four, five, or six evenings, which in London, at least, go round and round, with six topics offered at any given time, on Monday evenings â€“ so you can go to one or six, or go to all of them again. Weâ€™ve had people who wait a year between each session but still do all six.

Thereâ€™s an emphasis in Quaker Quest in learning from the people who come as much as them learning from us. We did it for six or seven years and then handed it on because thatâ€™s the Quaker way â€“ we donâ€™t like to hang on to jobs territorially. Thereâ€™s to be a dinner to celebrate the 400th edition in London, and theyâ€™re now all over the country as well. And Susan Seymour and I went to Australia to set it up there, and itâ€™s all over the United States.

Quaker Quest also produces books, published by O Books, and Iâ€™m just writing an introduction to Quakerism which should be published next year. Thatâ€™s my present job.

In my anthology, The Spirit of the Quakers, I included Pierre Ceresole, who is often underrepresented. He wrote in very small bites, notebooks. His writings remind me of Marcus Aureliusâ€™s Meditations, and I found him enormously rewarding to rediscover and hopefully to introduce to a new readership. And it was lovely to read Gerald Priestland again. Adam Curle means a great deal to me. And George Fox…

â€œTo turn all the measures we possess into the channel of universal love, becomes the business of our livesâ€ is a little sentence by John Woolman. It has the essence of Quakerism. Perhaps it leaves out the divine… unless universal love and the divine are the same thing.

Quakers have always been good at spotting stuff that was difficult to see at the time as a big serious problem, but is later manifestly an iniquity that all see. Some of the first Quakers kept slaves, and there was a debate among Quakers at first, but then they stopped, and later everyone saw that it was iniquitous. Actually the ecological movement and the are for the earth was talked about by Quakers in 1750.

It would do Quakers no harm to develop better ways of communicating with the world outside. People used to realise what Quakers witnessed to in the past because of their public actions; everyone knew about ambulance driving during the First and Second World Wars, and in 1947 the British and American Quakers were awarded a Nobel Prize for Peace. I think thatâ€™s changed: Quakers need to do a little bit more to tell the world they exist.

Being a father was the most massive choice for me, and is a continuous joy. It changed everything â€“ my career and directions. And joining the Quakers was a big one â€“ a really big one. Being an â€œattenderâ€ is one thing but being a Quaker is a big, big step.

I donâ€™t believe in regrets. No experience is wasted. Iâ€™ve had a very privileged and full life.

I wouldnâ€™t have anything on my tombstone: Quakers donâ€™t do that! They just put the name and leave it at that. Iâ€™ve written three books â€“ the anthology, and the one Iâ€™m working on now, and also a book on how to do magic tricks â€“ but itâ€™s only available online for professionals. You have to know the password! Thatâ€™s quite enough.

The inconsistencies of the Bible worry me. If you look at Psalm 23 youâ€™re told the Lord is your shepherd. If you look on the very same page, at Psalm 24, you find heâ€™s â€œthe Lord strong and mighty in battleâ€. I know some people donâ€™t see any inconsistency there at all, but I do find that difficult.

Thereâ€™s a moment in Gethsemane which gets me every time. Jesus is in Gethsemane, and he tells them heâ€™s going to pray and they fall asleep, you know the piece. And he asks three times, â€˜Couldnâ€™t you even stay awake with me?â€™ That moment absolutely haunts me. Am I asleep? Should I be more awake? I ask myself that all the time.

I love the countryside, but Iâ€™m drawn to cities more and more, especially as I get older. I love London, Sydney, Barcelona, Madrid. If I had to say my favourite place it would be Madrid, in the Plaza Major, or the Prado. 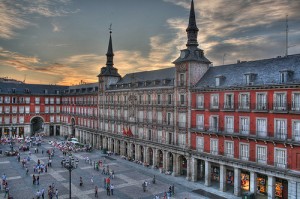 If Sibelius is the soundtrack of my life, the visual equivalent is Cartier-Bresson. I have his photographs all over my house. Iâ€™m just in awe of his skill: the way he uses the geometry of an image to present a brief moment. He said: â€œTo photograph it to hold oneâ€™s breath.â€ Iâ€™m entranced by him, heâ€™s with me everywhere.

I might be locked in a church with Cartier-Bresson. I find churches a bit high, tall, cold, and eerie, particularly if theyâ€™re not full of people. But think of the photographs weâ€™d emerge from a church with! Or I might choose Ghandi. Iâ€™m absolutely fascinated by him.

This interview is published in Nayler with permission of The Church Times. According to their website, The Church Times, founded in 1863, has become the world’s leading Anglican weekly newspaper. It has always been independent of the Church of England hierarchy.

Geoffrey Durhamâ€™s book The Spirit of the Quakers is available from the bookshop in the Quaker Centre, at Friends House, London.

Note: any mistakes in reproduction are Nayler’s.