The Constitutional System in New Zealand 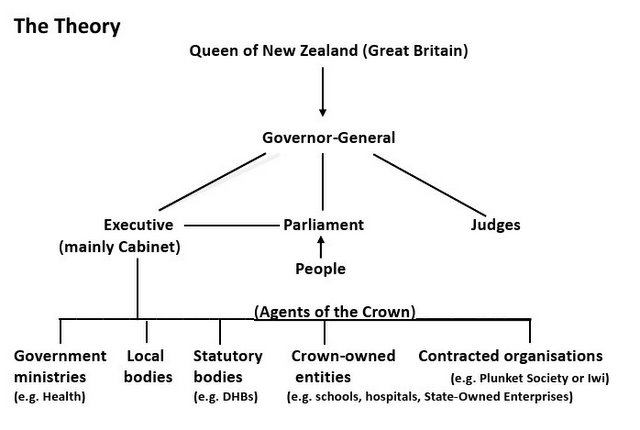 lÂ  We follow the British tradition, very unusual among nations, of not having a written constitution. In fact our constitution is based heavily on the British one, so it is a mix of ancient documents (Magna Carta, the 1688 Bill of Rights, etc) and â€œconstitutional conventionsâ€ (the way things have traditionally been done).

lÂ  The people elect our Parliament, and we are therefore in principle a democracy.

lÂ  Parliament makes and unmakes our laws by legislation; but legislation must be signed off by the G-G or the Queen before it becomes law.

lÂ  The Queen and the Governor-General actÂ  only on the advice of their Ministers, so cannot refuse to sign laws which Parliament has passed.

lÂ  The main part of the Executive is the â€œMinisters of the Crownâ€ (mainly in Cabinet).

lÂ  The Ministers are all MPs and remain part of Parliament; they introduce all new legislation other than Private Members’ Bills.

lÂ  Legislation in most circumstances goes through a Select Committee process, where anyone can make a submission for or against it, and can ask to appear in person to speak to their submission.

lÂ  The Ministers are each responsible for one or more portfolios, e.g. Health. They are responsible for the administration of their portfolio, which is carried out through the various â€œagents of the Crownâ€. These bodies are accountable to the relevant Â Minister through legislation or contractual obligations.

lÂ  The Judges hold warrants as â€œthe Queen’s Judgesâ€ and these cannot be withdrawn except in the most exceptional circumstances. This keeps them politically independent.

lÂ  The Courts cannot challenge a law passed by Parliament, but must interpret it to fit the cases that are brought to them.

lÂ  When there is no relevant legislation, the Courts apply the Common Law. In Aotearoa New Zealand there are two sources of Common Law: one based ultimately on the customary law of England, handed down from time immemorial but re-interpreted by senior judges in every generation to fit new circumstances, therefore often described as â€œjudge-made lawâ€; and also, in former British colonies such as ourselves, the customary law of the indigenous people of the country.

Why it doesnâ€™t work in practice

Why are we so dissatisfied with our elected representatives? Why does Parliament make laws which in some cases are opposed by the majority of the people?

This document accompanies the article Constitutional review: an opportunity for influence.