This book is concerned with the history and descriptions of Meeting Houses and burial grounds, and covers the British Isles and the United States, but principallyEngland.Â  Its author was the architect responsible for the post-Blitz reconstruction of the Westminster Meeting House, and designed and built many Meeting Houses in London, notably Friends House.Â  This latter topic is covered in considerable detail â€“ it remains a building of real urban significance within a hard, very formal setting, whose design was the result of a competition between five Quaker architects: a protocol unlikely to be followed in the present day. 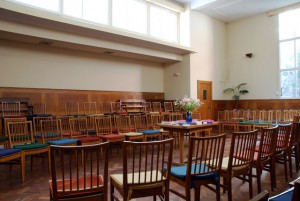 Hubert Lidbetter makes a point of stating his intention to write not just for architects or Quakers, but for the sake of general interest. I am categorised here, so itâ€™s hard to judge whether this is achieved, but through clear and concise description and discussion of the layout and disposition, and the fabric â€“ bricks, mortar, plaster, timber and slate â€“ of Meeting Houses, he composes an accomplished typology of these buildings. Although not discussed in detail, this inevitably relates directly to the patterns of use and human activity therein. Â The narratives of the buildings, inferred but not stated, are by default those of Quaker practice, which in its simplicity doesnâ€™t need to correspond to this or that specific architectural feature but can just be held or framed in the readerâ€™s mindâ€™s eye by the rooms and spaces described in the book. The absence in the text can therefore be turned into a substantial presence, nourished by the words and pictures offered here.

The text is written with considerable wit as well, with well-chosen and recounted anecdotes illuminating the characters involved in the origins of these buildings over the years, for example the quoted words of a wealthy Friend when asked to contribute to the construction of a church designed by a Quaker architect in the early 19th century: â€œHow canst thou expect me, a Quaker, to contribute to the cost of rebuilding thy Steeple â€“ but I do not mind giving three hundred pounds towards the cost of demolishing the tower.â€

It seems a little odd to be reviewing a thirty year old edition (not even the latest) of a fifty year old book.Â  The publisher even, is no longer with us, having gone into receivership only in the last couple of years.Â  Hubert Lidbetter was very much a 20th century architect and writer, and Iâ€™m very aware of reading his book at a point in the 21st century where it feels like the qualities of the previous era are just coalescing in our minds enough to be identified. I picked the book up as a curio, certainly, but it has also made me think hard on a number of points.

In contemporary architectural culture, there is a fashion and a strong and often misguided desire for â€˜minimalismâ€™, which often involves much contrivance and constructional sleight-of-hand to achieve. This book has reminded me not to confuse this with â€˜simplicityâ€™, which has guided Friends to build Meeting Houses with elegance and integrity for centuries.

Furthermore, the Meeting House as a type is quite revolutionary in its historical context in that it combines social and spiritual functions, through a desire to bring these closer together. The norms of ecclesiastical building clearly separate the two, and though I love to read the heady poetry of space and ornament that can come from societyâ€™s desire to construct purely sacred space, this may have a great deal to do with the perceived apathy towards the established Church today.

The Meeting Houses in the book â€“ those now given to other uses (in an entirely apposite way where deconsecrated churches are always seen as rather strange), those demolished, and those still used and cherished by Friends â€“ all came into being through the actions, one imagines, of small groups of Quakers negotiating the complex webs of decision making that are required to conceive and execute a building project. The processes by which these decisions were taken, one further surmises, were clear, conscious, and inclusive.

In the present day, the procurement and construction of a building has become even more complex and technocratic, and arguably pushed beyond the sphere of influence of those that the building should be serving.Â  I wonder, therefore, whether these decisions made manifest in the built space and utility that make up the subject of this book could serve as examples to promote the qualities first noted by Vitruvius in the 1st century BC, and also quoted here, of â€œcommodity, firmness and delightâ€.

Michael Jardine is an architect in practice and partner of Oliver Morgan Architects.

One thought on “The Friends Meeting House”