On my bag, I have a badge, and on social media, I have an avatar, and both say â€œIâ€™m a Quaker – ask me whyâ€; that last one was just for Quaker Week, though. People are still slow to ask, but every little helps when letting people know what Quakers are really about. I donâ€™t want people to know so theyâ€™ll become Quakers, but Iâ€™d like people to have that opportunity, because I feel Iâ€™ve benefited so much from it. I wasnâ€™t raised in the Society of Friends, and it was a long time of seeking before I found it.

Iâ€™m a Quaker because, well, it fit. When I met the woman who is now my fiancee, and learned she was a Quaker, I wanted to learn more about it, as I always have about any faith. I am glad she was so forthcoming about it all. After I started going out with her, she took me along to an old friendâ€™s (Quaker) wedding. Hearing that I was not a Quaker, but that I had some beliefs of my own, another old friend asked what I did believe. When I had finished explaining my somewhat inchoate view of spirituality, she pronounced â€œyou are a Quaker, you just donâ€™t know it yetâ€. I think she was right.

One reason Iâ€™m so comfortable as a Quaker is that, in the liberal tradition, it doesnâ€™t require belief in a theistic God. On the question of God (or gods), I am ultimately agnostic, but I lean towards the view there is no such being; the balance of evidence feels very much in that direction. The teachings and traditions of the Society of Friends are compatible with a wide range of theological positions, including ones with no God in them. It means that I use some different language from Christian Friends, and I have to interpret what they say into how Iâ€™d say it. We think of things differently, but the results are, for the most part, the same. Itâ€™s a difference that is easy to live with.

I live my faith mostly by living my life. My faith teaches me to live in the world, to work to improve it, and thatâ€™s what I do. I may not have much of an impact, but I do what I can, and sometimes I see it make a difference. Iâ€™m active in Young Friends General Meeting, and have given service there in various ways. Iâ€™m involved in campaigning around disability and welfare reform. I aim to enter academia because I think I can make a difference there. I donâ€™t proclaim my faith (much), but nor do I hide it. Quaker traditions, and the testimonies, inform much of my life, but I donâ€™t think about them all the time. To me, this is how to live as a Quaker. 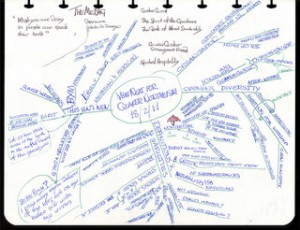 An exploration of non-theist Quakerism at a Woodbrooke event. Photo: dumbledad/flickr CC