I found old school Quakerism in a place that may surprise my liberal unprogrammed F/friends, in an Evangelical Friends college that had largely forgotten its historical Quaker roots.

I grew up a nominal Catholic and in my early teens my family began attending a charismatic Evangelical church. It was there that I encountered Christ in a way that my life was forever altered: I felt the leading to become a full-time pastor. I didn’t know much about being a pastor, what kinds of qualifications one might need to have, or even where one might go to fulfill those qualifications, but I assumed that becoming a pastor meant that I should go to college. So when I graduated high school I found the nearest college that would give me a Bible and Theology degree and off I went.

It was at this little Friends school that I – along with most of my classmates – started to have my faith radically challenged and changed. I remember one New Testament professor who, on the first day of our Hermenuetics class, walked into our classroom, introduced himself and said, “If you don’t support women in ministry now, you WILL by the end of the class. You should know my wife is a full-time pastor of a mainline church.” If he didn’t say it so succinctly, or if he added a little sugar-coating to the claim, my memory has since forgotten. All I remember is the effect it had on me. The church I went to as a teenager was very against the idea of women as ministers and I had always struggled internally with their teaching but couldn’t articulate it. This NT prof shocked me and offered me an entirely knew framework to begin understanding the bible.

I had subsequent theological paradigm shifts that amounted to jolts of shockwaves through my skull, all registering off the richter scale. Among them, Jesus was a pacifist?! You can read and respect the bible without believing that every comma, period and dotted ‘i’ was done by the good Lord himself? God’s primary concern is not to make us healthy and wealthy but to care for the poorest among us? What?! The church isn’t just about a bunch of doctrines, it’s about living out faith in Jesus-like waysâ€¦? And on and onâ€¦

All of this shocking and shifting and ground-quaking beneath me amounted to a deep sense of being lost:

“I know what I no longer believe. I know where I no longer fit. But where do I go from here? I started college to become a minister, how am I still to be a minister when everything that brought me here has changed?”

It was in this time period when I came in contact with the Friends. I started looking for a church to connect with and work in, and maybe in the process I would find my place. However, the only church that had an opening, the only church willing to hire me, a snot-nosed 21 yr. old college student, was an Evangelical Friends Church. They hired me to be their youth pastor…

In the process of doing youth ministry at the church I began to read the history of the Friends – a novel idea that wound up transforming my entire life. It was in this searching and reading old history that I became a Quaker. When I learned that there was a whole tradition of people who truly practiced the idea of the “priesthood of all believers,” had testimonies of plainness, truth-telling, and were against wars and violence I was paying attention. Here was a community that was historically rooted in a radical, social-justice oriented, Christian witness; now I had the language for what I was already trying to practice.

The first thought that ran through my head was, “I am a Quaker and didn’t know it.” I’ve since learned that many others have felt similar feelings to this in their convincements. My experience is similar to what my favorite author, David James Duncan, says in his book River Teeth, “In my own such experiences I am more often acted upon than actor; more eye than body; more witness than hero. Yet the emotional impact of such experiences is often huge.” This was true for me. The Quaker tradition was acting upon me, I was witness to God within an entire community of people and was adopted in. Becoming a Quaker saved my faith and brought me into a tradition that could shape and mold me in a new direction.

I became a Quaker because of its radical Christian history, its understanding of Jesus as our present teacher, its decentralized practice of community, its resistance to the status quo of religiosity and consumeristic faith, and its ability to creatively “remixing” the Christian tradition – and the Bible – in new contexts – at least that’s how I’d put it now. Its practices of equality, justice, peace, discernment and concern for the poor were at the top of the list of things that helped me make sense of my Christian faith in a new way.

Bio: Wess Daniels is a released minister at Camas Friends Church, an adjunct professor at George Fox Seminary and a daddy to three wonderful children. Read his blog at gatheringinlight.com. 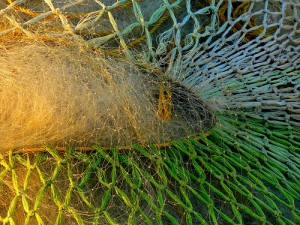 2 thoughts on “Why? How? Wess Daniels”