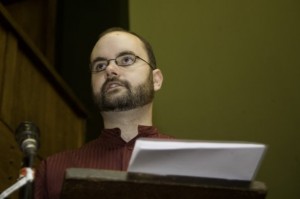 As a Quaker, I start with experience.Â  How we experience the world is so affected by our own culture and context that it canÂ  seem impossible to look beyond them. And yet spirituality at its best aims to do just that, allowing us to glimpse the possibilities that become apparent when we focus on a higher power.

I grew up very aware of the injustices of a world in which my hardworking, intelligent father was consigned to the dole.Â  For a while, I regarded religion as part of the problem but then I came to be interested in religion that is socially and politically radical.Â  Shortly before my eighteenth birthday, I was taken by surprise by an inward experience of Christ.Â  I was convinced that Christ was in some sense alive and this conviction remains with me today.

I do not claim any exclusivity for this experience.Â  Millions of people throughout history and across continents have experienced something of divine power.Â  Sometimes this is only a glimpse, sometimes it is more.Â  Yet we all see only something of that power, our fumbling attempts to describe it hampered by the limits of language and the constraints of context.

Mystics in all traditions recognise the limited nature of such experiences and the need to work through them.Â  Many, including Friends, emphasise the relationship between mystical experience and practical activism.Â  It is this refusal to distinguish between the holy and the everyday, the sacred and the political, that has made Quakerism appeal to me so much.

I am very excited by the Quaker concept of Testimony.Â  To testify means to witness.Â  If I were a witness in court, my testimony would be valid only if it were based on my experience, rather than my assumptions, my beliefs or even my reason.Â  Testimony is about witnessing to our experience of God in the way we live our lives and work for a transformed world.Â  For this reason, it worries me that we are increasingly listing testimonies as if they were simply a set of beliefs.

While I have sought to testify in many ways, it is perhaps the peace testimony which I have explored the most and with which some Friends tend to identify me.Â  As we all know, peace is about more than an absence of violence.Â  The word translated as â€œpeaceâ€ in the Hebrew Bible is â€œshalomâ€.Â  Shalom includes not only peace in its narrow sense but refers to a situation of justice in which healthy and balanced relationships are restored.Â  As I explore and promote pacifism, it is this vision that it is in my mind.

I have been very fortunate to work professionally on issues that matter to me and which relate to my Quakerism.Â  For three years, I oversaw media relations for the Campaign Against Arms Trade, and was privileged to be part of the team that took the government to court for cancelling a Serious Fraud Office investigation into BAE’s Saudi arms deals.Â  While this gave me experience of high-profile campaigning, it is often at the grassroots that I feel most at home.

I now work freelance most of the time, while also working two days each week as a news reporter for The Friend, the independent weekly Quaker magazine.Â  The Friend’s independence is a blessing.Â  It means that as well as being a Quaker voice in the world, we also have an important role in holding Britain Yearly Meeting to account, although this can sometimes lead to uncomfortable communication and relationships.

My freelance work includes my work with Ekklesia, a Christian thinktank that focuses on the place of religion in a post-Christendom society.Â  Christendom was the era in which the Church was allied with power and wealth.Â  I believe that post-Christendom gives us an opportunity to look again at Jesus’ radical message.Â  Christians in post-Christendom can draw on radical traditions that have resisted dominant forms of Christianity over the last two thousands years.Â  Quakerism is one of those traditions, and I am keen that others may learn from Quakerism without feeling the pressure to convert to it.

Jesus was killed because he was too free.Â  The freedom to which I believe he calls us was reflected in a life full of activism and love.Â  He made no distinction between the values that informed his teaching, his attacks on the powerful and his personal relationships.

I know that I sometimes misuse my activist commitment to avoid thinking about the ethics of my everyday life and personal relationships.Â  I can promote nonviolence at a political level while ignoring the seeds of violence in my own life.Â  I must remind myself constantly to respond to the challenge of testifying to God in all areas of my life.

This is not easy, for the dominant values of the world are against me â€“ against us.Â  To be Quaker is resist the conventional views around us.Â  We are aided by a power that is more subtle, more confusing but ultimately stronger than the sort of power understood by the pimp and the arms dealer.

There is a tradition in Islam that compares the power of God with the power of a weed that grows through the gaps in concrete.Â  The concrete cannot stop it, despite appearing to have greater power.Â  It is this frightening, fulfilling, mindblowing power of the apparently weak, to which I believe we are called to testify.

This talk was delivered at Westminster Friends Meeting for Worship for Business on 14 November 2010.