Two Quakers, Kristin Skarsholt and Ian Goggin, are part of the Equal Love 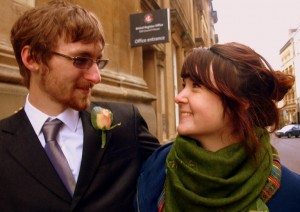 Â campaign, which seeks equality in the law for the marriage of same-sex and different-sex couples.

Kristin and Ian are one of eight couples who have formally filed a joint legal application to the European Court of Human Rights on Wednesday 2 February, in a bid to overturn the twin bans on gay civil marriages and heterosexual civil partnerships. The challenge is spearheaded by Peter Tatchell of the Lesbian Gay Bisexual & Transsexual (LGBT) human rights group OutRage!.

Nayler: Why is this issue important to you?

First of all, we do not wish to enter into marriage while this institution is not open to same-sex couples. We see the right for same-sex couples to marry as a very important step towards non-heterosexuals being recognised as equal to heterosexuals, in culture and law. On a more personal note, we wish to be recognised as ‘partners’ in law, because we do not identify with the language, history and culture that follows marriage.

As part of the Equal Love campaign 8 couples (4 same-sex and 4 different-sex) are mounting a legal challenge to the twin bans on same-sex marriage and different-sex civil partnerships. During November and December 2010, the same-sex couples applied for marriages, and the different-sex couples applied for civil partnerships. All the applications were refused as expected, and now the letters of refusal will be submitted as evidence in our legal challenge. The case is going direct to European Court of Human Rights, mounting a challenge to the law’s discrimination on the basis of sexual orientation.

Nayler: How does being a Quaker help you in this campaign?

(Kristin answers:) The support from Friends is strengthening for me. Having grown up a Quaker, I am certain that it helps me see and explain in basic terms why I find equality such an important aspect of society.

Nayler: Have your Meetings been supportive/what has been their reaction?

Our local Meeting in Bristol has shown its general support for the campaign we’re involved with. Young Friends, particularly at Young Friends General Meeting (YFGM), are especially supportive and willing to discuss the issue with us, which is very helpful for formulating explanations for our thoughts and motivations.

Since it is a campaign national to the UK, we have not involved the Irish or Norwegian Yearly Meetings (YMs) especially. Since there are different cultures within different Quaker YMs, we have somewhat mixed feelings about opening debates outside of Britain Yearly Meeting (BYM). However, we feel great support from many friends we have through the Quakers.

(Ian answers:) However, the debate surrounding homosexuality is much stronger in Ireland than the UK. Many more people hold traditional biblical view that it is sinful. There is also a reluctance to discuss it because it is such a contentious issue. This saddens me particularly when the LGBT community is such a vibrant and important part of BYM. However there are some recent positive signs. Irish Junior Yearly Meeting submitted a letter last year to Ireland YM stating their support for the acceptance of homosexuality, and wish for marriage equality. I almost hugged the lot of them, because that took a lot of bravery and thought. It has caused discussion at Yearly Meeting’s Committee, and hopefully we can have an open and honest discussion about it soon. But we are a long way from outright support like BYM.

Nayler: How has your Quaker faith been a help to you in this campaign?

(Kristin answers:) As ‘faith in action’ – or acting on my moral persuasions – the campaign feels very important to me. I believe that a successful campaign will be for the betterment of many in British society, and be a milestone for equality and recognition of non-heterosexuals as valuable, rather than particular anomalies or even disgusting.

Nayler: Why as Quakers would you not have a Quaker marriage?

We would still be entering into marriage and – in our minds – condoning the exclusion of our non-heterosexual friends from that opportunity. We would still be known as husband and wife, in law, and these are titles we do not feel comfortable with from the perspective of equality within our relationship. It is true that these titles are ‘only’ words, but words carry the meaning that is conveyed to the outside world, and carry symbolisms as much as they can hold role descriptions. Words are important, and we wish to both be known as ‘partner’ to each other.

(Ian answers:) As an atheist I also dislike the explicitly religious implications of a Quaker marriage. Those aren’t the aspects of Quakerism that appeal to me.

Nayler: What would change for you if you were civil partners as different to being in a relationship?

We would have the legal recognition that comes with formalising our relationship, concerning inheritance, family status, children etc. And we would get to throw a massive party.

Since this is a two-pronged approach to challenge UK law, success would be if both institutions of civil partnerships and civil marriage are opened to all couples. Because of the precedent in other European countries for the abolishment of civil partnerships for the sake of equal access to marriage only, there is a chance that we might end up with only one institution (marriage, but open to all couples). However, this would limit choice in a time when it is possible for us to double the options for all. We want both institutions to be open to all couples so each couple can enter into institutions that they feel culturally comfortable with, in what is one of the most personal choices of a life. Although there is no statistic on how many different-sex couples would like to have a civil partnership, we have heard from a large number of like-minded heterosexual couples who do not wish to enter into the institution of marriage, which many see to carry baggage and connotations they do not identify with. In the Netherlands, where the two complementary institutions exist, 90% of different-sex couples choose marriage and 10% choose civil partnerships.

If civil partnerships are opened to different-sex couples but marriage remains exclusively for heterosexuals, then we will have to keep campaigning for equal rights for non-heterosexuals. At the end of the day we must be held equally before the law. Any less is not good enough.