Peckham is an area where suspicion of the police is commonplace. It was one of the many centres of Londonâ€™s riots: a shop and a bus burnt, shops smashed and looted.

Yesterday, I joined members of the local theatre company Peckham Shed that I have worked with for three years. We went to Rye Lane, the main shopping street in Peckham, which is in the south of the city and just a few minutes walk from where we have two childrensâ€™ theatres and a youth theatre.

We work a lot in schools around the area. We know some of the daily frustrations faced by young people in Peckham, and we also know the inspirational tenacity and fortitude of its young people. Working in theatre, we get to see the imagination and passion of people who are often told they offer nothing and are going to get nowhere. That is a privilege.

Through my work I encounter those who sympathise with the sentiments of the rioters. At Peckham Shed, our focus is on understanding peopleâ€™s often complex needs even when behaviour is confusing or even frightening. So yesterday, as a beginning, we wanted to remember with everyone why we love Peckham, what the place and the people mean to us.

On Rye Lane many shops were open, a lot of clearing up had already been done. Small knots of people stood talking urgently, more hurt than fearful. The tension rose and died throughout the day.

Four of us asked people to write a message to our community, explaining why they love Peckham. We used the wooden boarding over the smashed window of a pound shop to put them up. A space for people to talk opened up on the street. Two young teachers met over a post-it-note in the morning and were still there in the afternoon, still debating the issues. 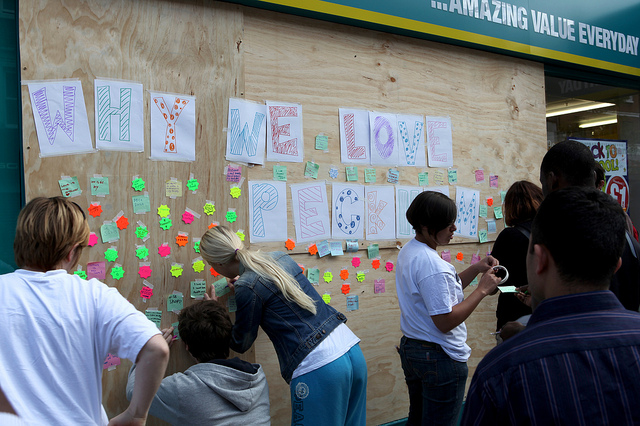 Why we love Peckham. Photo: celie/flickr/CC.

Throughout the day, people came and asked: â€œwhat is this for?â€

â€œFor us, you and me, everyone,” we replied.

But that is not what people assumed. Surely we must be taking a stand for or against, not just the riots but the rioters?

I was surprised by the amount of press coverage we got. Some media reports saw us as part of the “fightback”. However we were not responding in the simplistic way they suggested by drawing battle-lines.

A lot of what people wanted to write came out of their anger that their livelihoods, their jobs, their neighbourhood had been attacked: â€œeveryoneâ€™s angry, but why we trash our own backyard?â€ read one of the notes.

But what emerged from the hours of talking to people was a basic understanding â€“ it’s not just criminality, it’s not that simple. A mother of five was out with her sister all Monday night trying to calm people down: â€œI love all of them, black, white, whoeverâ€.

Several young men stood across the street from us, arms folded around their anger, muscles tensed to keep a hold of it.

I went over and asked if theyâ€™d write something and say why they love Peckham.They said they didnâ€™t want to cross the street to us because there was a camera crew and they didnâ€™t want their faces being filmed. They spoke as if they expected hostility and disapproval from me.

I told them I could take down whatever they wanted to say, and put it up for them. Five of them all talked, more or less at once. There is the economy and jobs, stop and search, the way they feel they are permanent suspects in the eyes of the police, the repression, and to my surprise they said they wanted a Labour government back. When I said, â€œreally!â€ one said all politicians are worthless but Labour are the best.

I came away with two post-its, one a manifesto as dictated to me, the other an ode to Peckham written by the guy in the middle. Their words went onto the board, but even after the camera was gone they didnâ€™t feel like the space in front of the board was for them.

A small group of young women came past, winding through the crowd in front of the board to see what was going on, then walking off with angry shoulders squared. A voice rose, chucked back at us, â€œof course they love Peckham. Theyâ€™re not doing this because they hate Peckham, it’s because the government treats them like shitâ€.

I approached a man leaning on his bike, and asked him if he wanted to write something. â€œYeah sure, but Iâ€™m wearing a hoodie so maybe I donâ€™t qualifyâ€, he quipped. I told him I thought you could love Peckham in a black balaclava.

Some people were fatalistic, some people were energised, others baffled at what they felt was a direct attack on them. There was a theme running through many responses, which was about responsibility. Many said: â€œThey should take it to the parliament if they want to protest,â€ more than once, while others lamented parentsâ€™ inability to discipline their children.

The strongest argument that broke out in front of the board was between two men. One said the riots were the result of inequality and anger at the government, the other told him not to play the blame game the young people had to take responsibility for what they had done: he had been in prison for a total of thirty years, and blamed no one but himself.

Later, he argued with a mother who said her five sons were responsible young men but you could not ignore the pressures on them. They are stopped and searched often, once four times in one day. He asked if she was saying that was because they are black and she said â€œNo, itâ€™s not a black and white thing, all the young people are angryâ€. They agreed on that much.

Afterwards he said to me that he wished he could tell those young people what he knew now, and in a way agreed that we were all responsible in some way.

One of us started gathering email addresses to hold a community meeting.â€œIt goes in two waysâ€, a woman said with a pained expression. Later I got a text calling for a rally entitled â€œNorth London Unity demo: Give our kids a futureâ€.

Actions like this are a way of facing in both directions at once.

Jo Tyabji is an actor and director, currently finishing a masters in Violence, Conflict and Development at SOAS.

This article is published by Jo Tyabji, and openDemocracy.net under a Creative Commons licence.

Click here to read the article and any comments at openDemocracy.net.