Before arriving at the Quaker United Nations Office Summer School in early July 2012 I was unsure of quite what to expect of the course, the QUNO staff or the other participants. I had worked for Friends House in London for a couple of years and while I thought I had a good idea of some common Quaker attributes I was felt that things would be different in Geneva. This was a much smaller office, with more specific aims, in a country with a lot less Quakers.

Â While I was genuinely excited to participating, prior to departing I discussed expectations with a co-worker at Friends house who was also attending the school. Amongst many thoughts, we questioned:

Looking back over the fortnight, I now realize that all these questions were answered in a very positive way.Â

An average day during the Summer School saw us move between various UN buildings, the headquarters of various international organisations (such the Red Cross, the World Trade Organisation or the World Health Organisation) and the more relaxing and peaceful setting of Quaker House in Geneva. We had talks, question and answer sessions, debates, went on organised tours and sat in on various UN meetings. The day ran from around 8:30am, when we would leave the hostel, until 6:00pm when we got back, dinner was usually at 7:00pm.

The staff at QUNO were excellent. From the moment we arrived to the end of the course they had everything planned for us, which for the most part ran accordingÂ to Swiss time and even when it didnâ€™t they improvised superbly. This was not just the obvious, the meetings at the UN, Red Cross, other organisationsÂ and transport between venues, but also meals at restaurants, a tour of the city and a hike into the mountains. They gave people advice on interesting and useful things to do in Geneva during our free time and occasionally volunteered to come along. For all this they expected very little, other than that we were respectful of speakers, staff and each other, that we paid attention and that we try to ask the most interesting and testing questions possible for all speakers (especially the World Trade Organization).Â Â Â

Staff members had specialist areas and this help contribute to debates both in scheduled meetings as well as in informal settings such as meal times. We were constantly with the programme assistants (one year, junior professional placements) as they led us from location to location and so we had ample opportunity to discuss their work and we were also were allotted time to ask the more senior staff members about the work of QUNO.Â  We got to understand how QUNO uses its connections, (built through networking, tolerance, and numerous free lunches) to work for both its specific programme aims and the broader principle of peace. I never inquired about the daily routine. The examples given highlighted that there was no set formula for accomplishments and success came through treating each case independently and therefore I presumed this individualistic method of working also applied to staff. Additionally, I found, talking to those who had worked at QUNO for several years, that the key to their success was patience and resilience; that if something does not work out, keep trying and looking at new ways of working and eventually a result will come about. Each staff member had a different experience and different interests, which were brought under the broad headings of Global Economic Issues, Human Rights and Refugees, and Peace and Disarmament. More specifically this included work on child prisoners, climate change and agricultural diversity and all of these were at different stages of development, from simply awareness building to actually working with other organisation to making an actual difference (such as establishing a law). Such a wide range of interests also allowed the participants to ask a range of questions and meant that we did not become bogged down in one specialist area.

The fact that I was neither a Quaker nor attender nor that I had never even attended a single meeting made no difference at all. In fact, through my work at Friends house IÂ  estimate that I had around the average knowledge of anyone in the group. The spectrum ran from those whoÂ were members of a Quaker Meeting to other who had no concept of who Quakers are, the work Quakers undertake or even the Christian traditions and history of Quakerism. Some considered themselves attenders; some had family who were Quakers or attenders, I worked for the Quakers, while others had been the beneficiaries of life changing Quaker assistance. However, such diversity led to interesting conversations and debates around religion and again illustrated how difficult it is to fully define a Quaker, even for John Lampen, a renowned Quaker author whose experience helped guide the group during the first week.

Outside of the daily routine, the other participants on the course were in the majority interesting and amusing people. They had a range of personnel interests and hobbies and most were up for trying new things. In the free time allowed by the summer school schedule people went swimming in the famous Lake LÃ©man, rode the bikes, went jogging, visited a major Jazz Festival as well as going to range of places of interest. However, the main non QUNO, meeting point was the local music festival just next to the hostel; here people met to talk, enjoy the music, visit the free shop that gave away clothes and books as well as indulge in a reasonably priced drink or two. It gave us a chance to get know each other better, trade interests, dance and generally just relax. This helped build the unity of the group, made the more serious summer school work more enjoyable and developed friendships that will last long beyond the summer school.Â Â Â

The individuals on the course had a fairly varied background and this allowed us some pretty unique interaction opportunities. Participants included a man from Iran on his first foreign visit, a former child soldier as well as a yoghurt-loving Brazilian and these are to name just a few of the amazing back stories people came with. Everyone contributed something and every time you talked to a new person you got new information.

Overall, and most importantly, the course was thought provoking and intellectually stimulating. Personally, I went to QUNO having an interest in international diplomacy, trade and conflict and through numerous aspects of the Summer School this interest was adhered to. I got questions answered by key organisations and much new information from talks, question and answer sessions as well as wider debates amongst participants. However, from almost every other session I attended I came away with a new perspective and felt I understood why that subject is important. I gained new information and new interests, all of which I now want to follow up.

For example, prior to attending the summer school I had never considered the importance of international Intellectual Property (IP) laws on agriculture and food production. Particularly, how a huge amount (around 70%) of earthâ€™s bio-diversity has already been lost (or destroyed) mainly through the â€œefficiencyâ€ of industrial farming conglomerates. I not only now want to read more, I am now actively looking to buy more localised (native) food varieties, telling everyone I know about this issue and from next year I am no longer growing F1 type vegetables in my garden (instead I will switch to rarer heritage crops).Â

In a similar vein, I gained further knowledge on international laws on weapons, how many governments still abuse the rights of indigenous people and the impact of statelessness on individual lives. While I always knew of the existence of such issues, the depth and importance of these problems has really been reinforced by my time in Geneva.

The fact that there are so many clearly important subjects also helped me to understand some of the broader problems that the UN and the international bodies face; who is the priority for help and assistance, when helping solve one problem often means neglecting one or multiple others? How can international diplomacy truly work fairly?Â  Is it possible to compartmentalise international interaction into areas such as trade, human rights etc?

There were negative parts of the two weeks. For example, many of the representatives often dodged answers to some of our more pressing questions. The methods most common employed would be to state that this was not their area of responsibility, give us a ramble that stated nothing clearly or stated â€œin my own opinionâ€ rather than the organisations opinion (personal opinions are interesting, but not what we asked for).Â  Food also became a touch monotonous as the weeks progressed. But overall, the problems were few and far between.

I left QUNO with many more questions than answers, something I believe to be positive and perhaps one of the less obvious advantages of attending the Summer School. Will it have a significant impact on me the future? Most probably. I now have an appetite to investigate a range of other subjects and while some of these will be forgotten, some (hopefully many) will remain. Since returning one of the most common questions I have been asked is â€œwould I recommend others to go to QUNO?â€ and that, unlike most of the answers we received at the UN, is very simple; yes.Â Â

If you have participated in a Quaker UN Summer School at Geneva and would like to join the new alumni network email Jez Smith([email protected]). 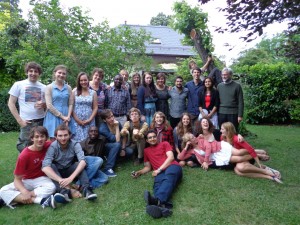