An elder gives ministry, saying that in their opinion, a Quaker cannot be an atheist. A recent enquirer says in notices that they are an atheist and are they welcome? Established attenders suggest not using the words God or prayer in an outreach leaflet, because they will be misunderstood.

What is my reaction? At one level, although I keep it to myself, I exercise the sarcasm pedal. We would have little difficulty in seeing Quakers for Trident, or Quakers for Bigger Bankersâ€™ Bonuses as aberrant. Yet when it comes to the fundamental nature of the universe, most things seem to go. I have talked of us as the church with â€˜one view on housing benefit and 20,000 views on Godâ€™.

Pragmatically, and directly contradicting myself, there are Quakers who are atheists. Some are clerks and elders and serve on nominations committees, making the wheels of the Quaker community turn. Some are personal friends of mine. Atheist Friends are here, already, and they are us. We neither expel people for their views nor insist on much of anything as stated belief when people formally join (and increasingly, people donâ€™t see the need formally to join.)

This goes beyond words â€“ some Quakers may speak of the Trinity, or God, or the Light, or the Word, or the Seed, or the Dao, or the Goddess. (or indeed, â€˜the whateverâ€™). But in some sense they see and feel something beyond themselves that they believe in some sense to be true. Some Friends use those words but are explicit that they are only useful ideas and donâ€™t exist as such. Others neither need the words nor the ideas, comfortable in the view that there is nothing beyond.

People look in vain for a statement of Quaker beliefs that we all sign up to. In so far as we exist as a community, it is through a mixture of principles and behaviours. Most of us sign up to the majority of them. This is why we can be a nominally Christian, pacifist, membership organisation which includes individuals who are not Christians or not pacifists or who do not believe in membership.

Much pain was spent over twenty years in the debate about Christian and non Christian Friends. But in fact, a Christian who believes the Spirit works in many ways and a Universalist able to tolerate occasional Christian language can have a great deal in common. Both can have the experience of being led, in worship and in meeting for worship for business… both may have experienced that mysterious â€˜otherâ€™, tested it, and been tested by it. Beyond Majority Rule, written by a Catholic, and many years old, already identified the true divide in Philadelphia Yearly Meeting as not Christian/Universalist but those who had experienced â€˜the gathered meetingâ€™ and those who didnâ€™t.

In a science fiction world two similar realities can coexist in the same time and place. In one there is a body where people use diverse wordings and explanations for a mystery that is, agreed, within them but also beyond them. They know it personally and also collectively through worship, they consider it helps them in decision making. Verbal ministry arises from a stirring that uses the individualâ€™s experience but goes beyond them, in me, from me and yet more than me. Crucially, they see this dimension as underlying how we as Quakers pick people for jobs, what happens in Meeting for Worship, and how we make decisions â€“ what we do, how we run ourselves and what we are for. Whether adopting same sex marriage or deciding whether to change the meeting house boiler for a biofuel one, we are not alone. However vaguely and inconsistently we see this spiritual dimension, working with it seems to them central to our organisation and purpose, and thus more than a purely personal position.

In another reality, in business meeting a clerk finds a form of words no one will argue with too much. Nominations committees find people for roles. Meeting for worship is silence punctuated by people letting off steam. We aim for coherence through having four or five vague organising principles which cannot be written down or made coherent. These principles, not what caused them to come into being, is seen as the foundation. We seek passion in how strongly we follow social causes. Or, we aim to be a community primarily through mutual care.

York 2009 kept me in the Society not because I agreed with the decision but because I felt again being led as a community. I know wise and sensible Friends who simply donâ€™t understand the difference between these two descriptions given above â€“ or who say it doesnâ€™t matter. And I donâ€™t rigidly know I am right to lean towards one â€“ I just feel pulled towards the first, as I was, inexplicably, drawn out of atheism and into a Quaker meeting, out of political hatred of Christianity and into exploration of faith. But as someone who often questions and worries about even the formulations I largely agree withâ€¦ could I be wrong, yes. But might it matter to be wrong, also, yes.

To the elder, I share some of your frustrations some of the time. But we are not going to have a Quaker creed or a Quaker Inquisition.

To the atheist attender I say, I didnâ€™t believe in God when I first turned up to meeting. I donâ€™t think the words matter, and for you, maybe all, or nearly all models for God will always get in the way. But it was my experience in meeting for worship that joined up the dots for me. Listen, wait and trust. It may change your life. Or, I may be deluding myself. All statements I make have a door open to change. Let us not have barriers between us prevent dialogue.

I canâ€™t go along with Karen Armstrong who now claims whether God exists is only the sort of question we ask post the Enlightenment and not important.

Maybe the bridge is how we wait and listen together. 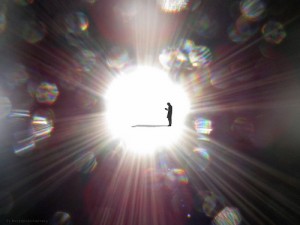 11 thoughts on “The God Dilemma”