Over Â£11bn for 18 days of sport. It is quite a tough one to accept, that. And particularly as a Quaker trying to live out a value of equality.

To me equality means seeking, finding and giving the Light in everyone the opportunity to shine. In practical terms this means giving everyone the same quality of education and opportunities regardless of personal or family wealth. It means government providing the highest standards possible in fundamental areas such as education, health and peace.

When I think of the Â£11bn being spent on the Olympics I can’t help but think of the savage government cuts from basic services like schools. When the Conservative-Liberal Democrat government came to power in 2010 they scrapped the Building Schools for the Future scheme and with it went 700 or so school rebuilding or improvement projects. And they froze grants to over 100 councils for building and running over 1,000 playground schemes.

One of the Olympic and Paralympic sponsors, Atos Healthcare, manages a Â£100m per year programme to assess whether sickness and disability claimants are fit for work. â€œIt is completely inappropriate that Atos are sponsoring the Gamesâ€, said Disabled people against the cuts spokesperson Paddy Murphy. â€œImplementing the government’s welfare reform agenda, Atos have devastated the lives of hundreds of thousands of disabled people and made millions of pounds of profit doing it. Now they are trying to portray themselves as supporters of disabled athletes. It’s offensive.”

Atos Healthcare are not the only company using the Olympic and Paralympic Games to promote themselves while behaving badly. John Lewis is a favourite with many Quakers not least because of their cooperative-style ownership. But this department store can find the money to be an Olympic sponsor but isn’t willing to pay its Oxford Street cleaners the living wage.

The cleaners are paid the minimum wage of Â£6.04 per hour and they have been striking as part of a strategy to be paid the London living wage of Â£8.30 per hour. John Lewis claims it can’t help the situation as the cleaners are contracted to a different company, but it is still their cleaners. Contracting out of staff and services is a growing trend with companies and government and it is wrong for such organisations to absolve themselves of their responsibilities.

The Olympics has brought out the worst in government as laws have come into affect that have allowed the state to detain people on a whim. One such victim of the situation was Quaker Lindis Percy. Lindis is a well-known peace campaigner. When the Olympic torch came to Harogate, she took the opportunity to talk to the American servicemen who were due to give the torch a ‘guard of honour’. While in polite discussion Lindis told Private Eye magazine that: â€œI was suddenly snatched, roughly and aggressively away. Seven burly West Yorkshire policeman policemen surrounded me and would not let me leave although I was not under arrest. I was told that I should not be there.â€ Minutes later she was arrested â€œto prevent a breach of the peace.â€ She was taken two miles to Harrogate police station where, according to Private Eye, she was released without going in front of a custody sergeant.

This is just one example of how our civil liberties can be eroded. And all, supposedly, in the name of sport.

However, some Quakers are engaging with the Olympics. Britain Yearly Meeting’s Quaker Centre has been signed up to be a part of the Christian ‘More than Gold’ hospitality scheme and is providing free water and wifi to cafe visitors during the games. And east London Quaker Peter Green has been appointed as a Quaker chaplain in a multi-faith team for the games.

I’m by no means against the Olympics and Paralympic games themselves. I just wish that a better way had been found of hosting them. As they stand, to me they’re the Olympic shames. 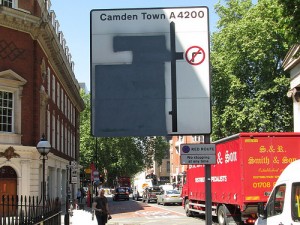 A road sign that has been blacked out because of an Olympic Lane in central London. Photo: Jez Smith