Crouching near the gravel, I brush away rocks to pull weeds. A long flight has brought me from America to Geneva to a tiny French village called Versonnex, and I find myself amongst rocks, dirt, and vegetables. I am not on a royal or priestly or magical journey, just a journey to work on organic farms, something they used to call weeding.

Who made a weed a weed? Some of them are quite beautiful, covering cracks cement walls that would otherwise just look like cement. Maybe Adam made them weeds when he ate one that he thought looked like fruit.

I pluck these weeds, bending low to the earth, but when I stand up, I get dizzy. My head squeezes my eyes, and my vision falters. The ground upon which I work seems so far south. I am not used to being so low, itâ€™s not my middle class American life. Sure Iâ€™ve worked landscaping, but that only gave me acquaintances, acquaintances with land here, there, and all over the place. Trying to get to know land well at a landscaping company is like trying to get know 20 people youâ€™ve never met before at a two-hour party.

Working the soil in another country isnâ€™t much different either. I lean down to touch it, but it does not know me. I am from Oregon, and this French dirt isnâ€™t.

When I stand up, the elevation seems so high, as high as the all the garbage of the world damned into one pile. Long have the earth and I been far from each other. Yes, it has been since Adam that I knew the earth well, but since Adam something has happened. Something that made flowers look like weeds.

When I sit down, I expect an office chair, because thatâ€™s where America tells its white men to go. But gravel nips at my thigh, telling me I donâ€™t belong, telling me that those pointed rocks were made for the bottom of car tires and shoes, made to separate the mud of the earth from my foot. At least, thatâ€™s what I thought it was for.

But that is not today; reconciliation comes slowly. As I reach my hands down towards the earth, weeds sting my hands me. I look at the weed hard, but my eyes cannot turn a thorn into crystals. Weeds are weeds.

Long have my white ancestors thought this earth was theirs to own and dominate, but thatâ€™s never what the weeds and rocks said, especially those rocks that cry out and adore Christ when I leave him to die. I am starting to hear those cries; cries that tell me the earth is not mine, that I am just the earthâ€™s lousy friend who does what is easy for me and not best for her, and that I am not as important or powerful as I think. Rather, I am a bit dizzy, disoriented, and out of control.

Maybe one day Iâ€™ll get used to this moving up and down, this weeding and gardening; then Iâ€™ll see the land where everything is love. But for now, the earth is spinning me around wildly, trying to get my attention. 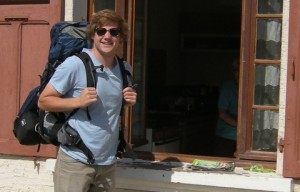